Skip to content
HomeHealthVaccinesAutoimmune hazards of hepatitis B vaccine 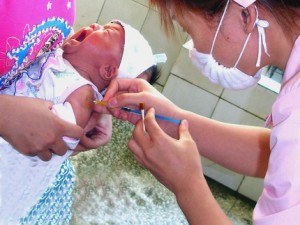 Startling new research published in the journal Apoptosis indicates that hepatitis B vaccine, which is designed to prevent Hepatitis B virus-induced damage to the liver, actually causes liver cell destruction.

In the study titled “Hepatitis B vaccine induces apoptotic death in Hepa1-6 cells,” researchers set out to “…establish an in vitro model system amenable to mechanistic investigations of cytotoxicity induced by hepatitis B vaccine, and to investigate the mechanisms of vaccine-induced cell death.”1

They found the hepatitis B vaccine induced a “loss of mitochondrial integrity, apoptosis induction, and cell death” in liver cells exposed to a low dose of adjuvanted hepatitis B vaccine. The adjuvant used was aluminum hydroxide, which is increasingly being identified as a contributing cause of autoimmune disease in immunized populations.

The discovery that the hepatitis B vaccine damages the liver (hepatotoxicity) confirms earlier findings (1999) that the vaccine increases the incidence of liver problems in U.S. children less than 6 years old by up to 294% versus unvaccinated controls.

Another study published in the journal Hepatogastroentology in 2002, observed that Hepatitis B vaccination was statistically associated with gastrointestinal reactions including: hepatitis, gastrointestinal disease and liver function test abnormalities in comparison to other vaccine control groups.

This, however, is only the tip of the iceberg…

In a revealing study published in June 2011 in the journal Molecular Biology Reports, researchers demonstrated that hepatitis B vaccine alters the expression of 144 genes in the mouse liver within 1 day of vaccination, 7 of which are related to inflammation and metabolism. The authors noted:

“Pharmaceutical companies usually perform safety testing of vaccines, but all requirements of the World Health Organization and drug pharmacopoeias depend on general toxicity testing, and the gene expression study of hepatitis B vaccine is not done routinely to test vaccine quality.”

Could the gene-expression altering affects of hepatitis B vaccine be one reason why there are over 60 serious detrimental health effects associated with the vaccine as documented in the peer-reviewed and published biomedical literature, including sudden infant death?

Other potential mechanisms of action behind hepatitis B vaccine’s dangerous side effects, are as follows…

Why Are They Vaccinating Infants For Hepatitis B Virus?

The real danger here is that universal vaccination against Hepatitis B virus may be causing far more harm than good. It is actually our youngest — infants — who are most at risk of being irreparably harmed, as the CDC’s vaccine schedule requires Hepatitis B vaccination at birth, 1-2 months, and then again at 3-6 months of age.

Universal hepatitis B vaccination was recommended for U.S. newborns in 1991, despite contradictory safety findings. Perhaps not coincidentally, the prevalence of autism today is 1500% higher than that occurring in the period immediately before their introduction. While there is no such thing as a “genetic epidemic,” in the traditional inheritable sense of the word “genetic,” there is such a thing as environmentally induced gene-expression changes, as described above. In other words, vaccine adjuvants (e.g. mercury and aluminum) and vaccine antigens are capable of profoundly affecting the stability of the genetic infrastructure upon which our health depends.

According to one review published in the Journal of Toxicology and Environmental Health in 2010, male newborns vaccinated with hepatitis B prior to 1999 had a 3-fold higher risk for parentally reported autism. Why before 1999? On 8/27/99 the CDC, in tacit acknowledgment of the profound neurotoxicity associated with the use of thimerosal (organomercury), approved the first thimerosal-free hepatitis B vaccine. Sadly, even after the removal of mercury (which was replaced by another neurotoxic agent aluminum hydroxide), autism prevalence is still several orders of magnitude higher than it was before the CDC’s increasingly overwhelming vaccine schedule (60+ by age 6) reached its present-day proportions.

Another glaring problem with Hep. B vaccine in infants is that Hepatitis B virus is only transmitted through blood or semen by those who are infected, which are two routes of exposure an infant — certainly not one born in a hospital — should ever be exposed to; unless, of course, the mother is a carrier, and therefore can transmit it vertically to her offspring. But hospitals can and should screen mothers for Hepatitis B preemptively, therefore making it unnecessary to vaccinate every infant blindly. In addition, there are no randomized controlled trials that have assessed the effects of hepatitis B vaccine during pregnancy for preventing infant infection, despite the fact that pregnant women are being given the vaccine for exactly this reason.2 There is also research indicating that immunization for Hepatitis B does not guarantee protection against becoming infected with it; i.e. it may not truly fall within the category of a vaccine-preventable disease.3

NOTE: For additional research on the under-reported, minimized and/or actively ignored adverse health effects associated with routine vaccination, visit the GreenMedInfo.com Vaccine Research Archive. For the research on Hepatitis Vaccine only, visit the Hepatitis B Vaccine page.