Skip to content
HomeGlobalismBill Gates and the new Malthusians 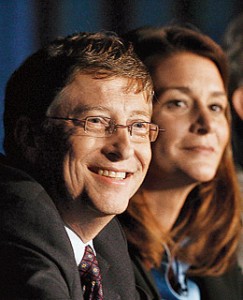 To commemorate the 100th anniversary of the first eugenics conference, the Bill and Melinda Gates Foundation put on a family planning conference in London last month.

The conference, which began on 11 July and was co-hosted by the UK Department for International Development, included among its coalition partners such organizations as Planned Parenthood, Marie Stopes International, and the United Nations Populations Fund (UNFPA).

From Hard Eugenics to Soft Eugenics

The original conference that Bill Gates wished to commemorate was titled The First International Eugenics Congress. It was convened in London from 24-29 July, 1912, and was presided over by Leonard Darwin, the son of Charles Darwin and dedicated to Charles Darwin’s half-cousin Francis Galton (1822–1911). Galton invented the term Eugenics to describe his theory that man could be perfected through strategic breeding. His ideas that certain races are genetically superior to other races had a profound impact on later Nazi theorists.

Early 20th century Eugenics theory was often accompanied by the notion that economics can be improved by decreasing the surplus population. Such ideas were based on the theories of Thomas Malthus (1766 –1834) who suggested that the poor were draining the world’s recourses. One of Malthus’s solutions for reducing the surplus population was to introduce policies specifically designed to bring death to large numbers of peasants. For example, he encouraged poor people to move near swamps, because he knew that they would catch diseases there and begin dying off.

The conference that the Gates Foundation put on last month to commemorate The First International Eugenics Congress included no calls for forced sterilization, but Bill and Malinda Gates did pledge hundreds of millions of dollars to improve access to contraception in the developing world. Following in the footsteps of early 20th century social engineering theory, they echoed Malthus by suggesting that we have an economic responsibility to ensure that there are fewer people. Wendy Wright has rightly called this the “latest effort to blame children for poverty and women’s troubles.”

Bill Gates is quick to repudiate his dependence on Malthus. In an interview with PBS, he told Moyers that “The one issue that really grabbed me as urgent were issues related to population” and he shared how originally he “thought that the Malthusian principles applied at least in the developing countries.” Gates went on to say how he came to understand that “essentially Malthus was wrong” and that alternatives to Malthus’s doomsday scenerios included raising wealth, improving health and educating women.

But we should not be too quick to assume that Bill and Melinda Gates have completely abandoned a Malthusian framework. On the contrary, Mr. and Mrs. Gates have both frequently drawn attention to the economic ramifications of there being too many people. This was made explicit by Melinda Gates in 2011 when she commented that “Government leaders…are now beginning to understand that providing access to contraceptives is a cost-effective way to foster economic growth…”

So what exactly is the relation between contraception and economic growth? The connection is simple: fewer people = more resources. This may not be the hard eugenics of Malthus, but it certainly involves what Andressen Blom and James Bell have called “soft negative eugenics.” Blom and Bell define soft eugenics as follows:

“for economic reasons governments should use taxpayer dollars to underwrite the decisions of citizens to pursue recreational sexual activity.  The underlying economic assumption is that the prospective children of the poor citizens likely to utilize such government-funded programs would be likely to hamper economic growth if they are born.”

This is not the first time that Bill and Malinda Gates have ventured into population control. At the Technology, Entertainment and Design 2010 Conference, Bill Gates gave a talk in which he suggested that the solution to global warming is to have fewer people.

This is part of a new groundswell of interest in population control which posits a direct relationship between global warming and the amount of people on the earth. The Microsoft founder reduced our planet’s problem to a simple equation: CO2=P x S x E x C CO2 (total population-emitted CO2 per year) = P (people) x S (services per person) x E (average energy per service) x C (average CO2 emitted per unit of energy).

The goal, Gates said, was to “get this down to zero.” Referring to P(eople) specifically, he said, “Now if we do a really great job on new vaccines, healthcare, reproductive health services, we could lower that by perhaps 10 or 15 percent.”

That’s right. Rather than leading to more life, which was the original purpose of vaccines and healthcare, their great advantage in Gates’ mind is that they can lead to fewer people. While this is obviously true when it comes to contraception, it is hard to understand how vaccination is specifically related to a decrease in the population. (But hold onto that thought.)

The Gates Foundation are certainly doing all they can to decrease what it sees as surplus population. In May of this year, they gave a grant of $100,000 to researchers at the University of North Carolina, Chapel Hill to develop a new type of ultrasound which has been described as a “non-invasive, reversible form of birth control for men.” Already tested on animals, it would make a man infertile for up to six months. Nine other grants were given to other scientists attempting to create new forms of contraception.

One of the coalition partners in last month’s conference was Planned Parenthood, whose founder Margaret Sanger hoped to “assist the race towards the elimination of the unfit.” Similarly, Marie Stopes International, who also had a prominent presence at the conference, was started by a woman who advocated for “the sterilization of those totally unfit for parenthood [to be] made an immediate possibility, indeed made compulsory.” (To read more about forced sterilization in the 20th century, see my article ‘Social Engineering and the Dark Side of American Liberalism.’)

But while these organizations previously supported forced sterilization, surely no one in the West still thinks that the poor and ‘feeble minded’ ought to be subjected to compulsory sterilization, right? Well, not so fast. Consider the following facts: