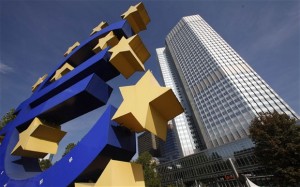 A classified draft of next week’s EU summit conclusions is the first step on an emerging “roadmap” to a banking union, pooling debt via eurobonds and political union via EU treaty change over the next 10 years.

The “limite” text – published exclusively by The Daily Telegraph, is secret, restricted for the “eyes only” of diplomats and officials preparing for the 28 and 29 June European Council in Brussels.

Most of the text, the annexed “Compact for Growth and Jobs”, are deals on project bonds and other small scale EU initiatives that FranCois Hollande is trumpeting as a €120bn “growth pact”.

The first draft is relatively uncontroversial because the eurobond and “banking union” issues are currently all too sensitive to be committed to paper for officials.

Other so-called “non-papers” are circulating at a top secret level between national capitals and Brussels.

The difficult issues not included in the draft are the “p.m” items in the draft: “other financial stability measures” and “PEC report on EMU”.

Translated from the Brussels jargon, the PEC – president of the European Council – report will be Herman Van Rompuy’s preliminary text of the future of “Economic and Monetary Union”. This will be circulated in sealed envelopes next week.

The separate text will set out a “roadmap” to a banking union, polling debt via some kind of eurobonds and political union via EU treaty change over the next 10 years.

Also important and controversial is will the “other financial stability measures” paper, including financial transition tax proposal and moves towards a banking union that can be taken by the EU before the end of the year.

Britain faces major fight over an FTT, or some other banking levy, at a meeting of EU finance ministers on Friday ahead of the summit next week.

The UK – which has no veto under current proposals on deepening EU banking regulation – also faces the ECB becoming Europe’s main banking regulator and the creation of national bank resolution funds that can be asked to contribute to European bank bailouts on a “compulsory” basis.