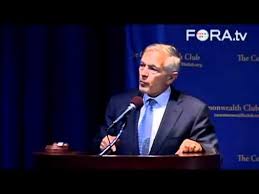 On October 3, 2007 at the Commonwealth Club of California, General Wesley Clark talks about a “Foreign Policy Coup” that he says “hard-nosed people took over the direction of American foreign policy…a policy coup.”

Those hard-nosed people he points out were from PNAC (Project for A New American Century) which included Dick Cheney, Donald Rumsfeld, Paul Wolfowitz just to name a few, who as you should know were part of the George W. Bush administration.

General Clark goes on to talk about how in the weeks following September 11th, 2001, he met with an officer at the Pentagon where he was told about a plan to attack and destroy the governments of 7 countries in 5 years – Iraq, Syria, Lebanon, Libya, Somalia, Sudan and Iran.

You may notice that the Bush admin’s PNAC boys didn’t exactly pull off the 7 countries in 5 years plan, but Barack Obama is continuing these PNAC plans in Libya and it looks like Syria as the media sells the public on these wars, just like they did with Iraq.