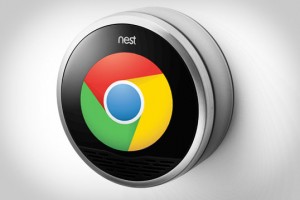 SAN FRANCISCO — Google intends to make even more of a splash in Americans’ homes. On Monday, it reached a deal to buy Nest, the maker of highly-styled digital smoke alarms and thermostats, for $3.2 billion in cash.

Nest, based in Palo Alto, Calif., has generated lots of buzz and sterling reviews for its aesthetic design approach to common everyday home appliances often overlooked by consumers.

Since its launch in 2011, the Nest Learning Thermostat has been a consistent best seller. The recently unfurled Protect (Smoke + CO Alarm) has landed rave reviews.

The acquisition thrusts Google squarely into multiple markets: search, e-mail, smartphones, PCs, tablets and — now — the home. Nest, in essence, puts Google in a prime position to cash in on the fledgling “The Internet of things” — a concept in which all digital devices in one’s home are interconnected in some manner for maximum sharing of data. Nest also sharpens Google’s design cred in the tech industry.

Google’s acquisition “affirms the growing strategic importance of the idea of the connected home,” says Forrester analyst Frank Gillett. “It also shows Google increasingly believes in hardware-software solutions such as Nest has built, rather than building operating systems” for makers of smartphones, Chromebooks and TVs.

Nest CEO Tony Fadell, who at Apple helped design the iPhone and iPod before he started Nest in 2010, will continue to run Nest.

“This was methodically planned — this was not a slapdash kind of thing over a weekend,” Fadell, 44, told USA TODAY. “This has been going on since the summer, when we started to think about raising money and when we also wanted to partner with certain teams at Google for technology, for infrastructure for various things.”

“I work on visions and creating products and businesses that I believe in and other people take notice,” Fadell said. “And, in this case, Google did.”

Google CEO Larry Page said Fadell and his Nest co-founder Matt Rogers had built a “tremendous team that we are excited to welcome into the Google family.”

Nest has snatched away talent from Apple, Fadell’s former employer. But analysts says that Apple would seem an unlikely suitor for Nest. “It’s a bit out of the mainstream for Apple if you see them as a home entertainment versus home automation company,” Gartner analyst Van Baker says.

The acquisition takes Google into a market that it, too, hasn’t yet explored, giving it a chance further drive its software and services into homes, Baker says. “If you look at it as a home automation play, that is a very much up-and-coming area.”

The deal also promises to open up development around the home, assuming Google moves Nest’s platform to an open-source software model, Gillett says.