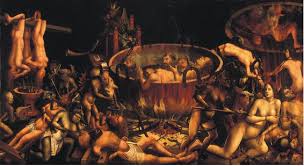 If there’s ever been any doubt in your mind that organized religion benefits the ruling class then a recent paper published by PLOS ONE, an open-access, peer reviewed online publication, should quash it for good.

Psychologists Azim F. Shariff of the University of Oregon and Lara B. Aknin of Simon Fraser University, British Columbia conducted a study in which they asked asked over four hundred Americans to write about Heaven, Hell or what they did yesterday. The Americans who wrote about Hell were more likely to show emotional negativity compared to the other groups.

This was consistent across believers and non-believers. Just thinking about Hell makes people ill and out of sorts, and they don’t even have to think that it’s real. It’s worse for the true believers: Individual belief in what the researchers referred to as “supernatural malevolence” (Coming soon to pay-per-view!) was associated with bad coping skills, low self-esteem and poor health resiliency.

Shariff and Aknin also referred to a second study reporting that in developing countries, mass belief in Hell produced a more compliant, “coordinated” population. Further, these countries were found to have higher Gross Domestic Products than countries without widespread belief in a punishing afterlife.

Believing in hell can make you sick and miserable, but also a more productive little cog in the big Machine. It’s kind of a nice arrangement: You’re too scared to really live because of what might happen when you die. It really does become a matter of choosing the devil you know when your options are standing up to your local despot and dealing with Satan later, or keeping your mouth shut and spending eternity in paradise. You’re incentivized – or at least browbeaten – into not making trouble.

Hell isn’t just a religious idea, it’s a meme; an especially toxic one that we might be primed to believe in from birth – especially if you believe those studies that suggest we’re hardwired to believe in god. Hell is such a virulent, deadly little mind-virus that even secular minds have trouble fighting it off. And it seems that there’s a vested interest in keeping it strong.

Jesus urged his followers to render unto Caesar, and made a pretty damned good example of what I’m guessing is an appropriate response to government persecution: Turn the other cheek and let the bastards nail you to a tree if they want to. Recognizing a good thing when they saw it, the Romans bought into Christianity – at least to the extent that it allowed the elite to maintain a nice, strong grip on the masses.

During World War II, Pope Pius XI secretly dreamed of building up a state of “Catholic totalitarianism”, going so far as to urge Catholics not to rebel against fascist leader Mussolini through various church publications. (See David Kertzer’s The Pope and Mussolini.)

The values of compliance, servitude and sacrifice aren’t just Christian things, either. The ancient Chinese conception of an afterlife was a bureaucratic nightmare that just so happened to mirror their Earthly government, complete with a heavenly Emperor. At least some verses in the Koran instruct believers not to rebel against Earthy leaders. And yes, there are hells awaiting sinners who cross the line.

Inculcating a belief – even an unreasonable one that persists despite the desires of the believer – is clearly in the interest of this world’s powers, but what can one do about it? How can the would-be free man or woman exorcise themselves of the grip of hell? It’s a difficult question, and maybe one that might be unanswerable. Even novelist Anthony Burgess wrote of suffering a “vestigial fear of Hell”:

“Am I happy? Probably not. Having passed the prescribed biblical age limit, I have to think of death, and I do not like the thought. There is a vestigial fear of hell, and even of purgatory, and no amount of rereading rationalist authors can expunge it. If there is only darkness after death, then that darkness is the ultimate reality and that love of life that I intermittently possess is no preparation for it. In face of the approaching blackness, which Winston Churchill facetiously termed black velvet, concerning oneself with a world that is soon to fade out like a television image in a power cut seems mere frivolity. But rage against the dying of the light is only human, especially when there are still things to be done, and my rage sometimes sounds to myself like madness. It is not only a question of works never to be written; it is a matter of things unlearned. I have started to learn Japanese, but it is too late; I have started to read Hebrew, but my eyes will not take in the jots and tittles. How can one fade out in peace, carrying vast ignorance into a state of total ignorance?”

Burgess wasn’t alone – if you do a little research online, you’ll discover quite a few self-described atheists and secularists still dealing with the afterlife jitters. Could it be that early indoctrination is enough to permanently scar the human mind? Neurologist D.F. Swaab’s We Are Our Brains makes an eloquent argument for the long-lasting effects of early environmental influences.

A very strong argument can be made (and in my opinion there’s no argument about it) that introducing children to a malevolent idea like Hell is child abuse, and early instances of abuse can cause permanent neurological change. Maybe by the time we’re old enough to really consider Hell, it’s too late. That tiny, persistent little spot of fear will never ever fade, and it will take effort to overcome its effects.

As the state reaps the benefits of this religious abuse, there’s little incentive to curb the powers of various cults and sects. After all, why stand in the way of a good thing? A frightened citizen is a compliant citizen, and there’s not much more frightening than being ripped to pieces by demons in a fiery abyss. No, change has to start from within one’s mind and home and in the form of total ideological rebellion against this implicitly theo-poitical union.

Within this context, one can understand the radical actions of so-called “crusading” atheists, for whom Hell – even if it doesn’t exist – must still be vanquished for freedom to truly flourish. It’s not just about separation between church and state: It’s an ideological war against an existential threat, and a desperate effort to free the human mind from the threat of a dangerous contagion.