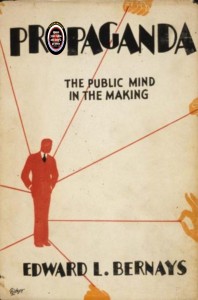 Bernays, described as the father of the media age, was the nephew of Sigmund Freud. “Propaganda,” he wrote, “got to be a bad word because of the Germans . . . so what I did was to try and find other words [such as] Public Relations.”

Bernays used Freud’s theories about control of the subconscious to promote a “mass culture” designed to promote fear of official enemies and servility to consumerism.

It was Bernays who, on behalf of the tobacco industry, campaigned for American women to take up smoking as an act of feminist liberation, calling cigarettes “torches of freedom”; and it was his notion of disinformation that was deployed in overthrowing governments, such as Guatemala’s democracy in 1954.