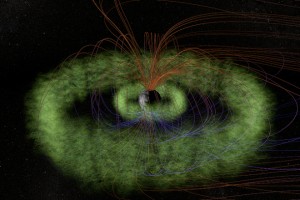 In a mission 11 years in the making, NASA today launched a pair of Johns Hopkins University satellites into the Van Allen radiation belts to study their structure in unprecedented detail.

KENNEDY SPACE CENTER, Fla. — An Atlas 5 rocket boosted a pair of satellites into the maelstrom of the Van Allen radiation belts early today, kicking off a $686 million mission to probe the structure of the belts and how they’re buffeted by the sun and to improve forecasting to reduce the threat they pose to astronauts, power grids and increasingly critical satellite systems.

“Today, 11 years hard work was realized by the science team,” said Nicola Fox, the deputy project scientist at Johns Hopkins University’s Applied Physics Laboratory. “They’re now at home in the Van Allen belts where they belong. … For the science team, the real work now begins. One big milestone was getting up there. The next big milestones are all of our scientific discoveries.”

Running six days late because of bad weather and trouble with a tracking system transponder, the 189-foot-tall United Launch Alliance Atlas 5 thundered to life at 4:05 a.m. EDT (GMT-4), lighting up the pre-dawn sky as it majestically climbed away from launch complex 41 at the Cape Canaveral Air Force Station.

Quickly accelerating through decks of low clouds as it consumed its load of liquid oxygen and kerosene rocket fuel, the Russian-designed RD-180 first-stage engine boosted the rocket out of the dense lower atmosphere and fell away about four minutes after liftoff. A few seconds later, the rocket’s hydrogen-fueled Centaur second-stage engine ignited, continuing the climb to space.

The Pratt & Whitney RL10A engine burned for nine minutes and 15 seconds to propel the launcher and its dual-satellite payload into a preliminary parking orbit. Fifty-six minutes later, a second four-minute 39-second burn completed the launch phase of the mission.

Mounted atop the Centaur were identical 1,400-pound solar-powered satellites built by JHU’s Applied Physics Laboratory. With the Centaur spinning at 5 rpm for stability, the first Radiation Belt Storm Probes — RBSP — satellite was released one hour and 18 minutes after launch, followed 13 minutes later by the second.

Four solar panels on each satellite then unfolded as planned and engineers reported both appeared to be in good shape.

“I’m very happy to report we have two healthy spacecraft on orbit,” said project scientist Rick Fitzgerald, wearing his “lucky tuxedo.” “Many thanks to ULA and the launch services program for giving us a great ride and injecting us in exactly the orbit we wanted to be in. Congratulations to the whole RBSP team for a job well done.”

He joked that NASA’s Jet Propulsion Laboratory “had their seven minutes of terror” with the recent landing of the Mars Science Laboratory Curiosity rover.

“I had my hour and 55 minutes of terror tonight,” Fitzgerald said. “I had dark hair when we launched. Glad to say we’re on orbit now and everybody’s happy.”

Into the hellish space of the Van Allen belts

The RBSP satellites were designed to fly in slightly different orbits tilted 10 degrees to the equator with high points, or apogees, around 19,000 miles and low points, or perigees, between 310 and 420 miles. The spacecraft will periodically lap each other, passing as close as 100 miles from each other and as far apart as 24,000 miles or so.

The spacecraft will fly through both main radiation belts, enduring hellish conditions to precisely measure the fields and particles defining the doughnut-shaped structures, how they expand and contract as they are buffeted by solar storms and how they change over time.

“We know what processes are going on in the radiation belts. It’s almost like making a cake. You know all the ingrediants, but you’re not quite sure of the proportions of each piece in each given storm. Sometimes, one process is far more dominant than another and that is obviously causing the radiation belts to respond differently to seemingly similar things coming from the sun.”

An initial launch attempt last Friday was scrubbed because of questions about a C-band transponder on the rocket that is used for tracking during the climb to space. After reviewing telemetry, mission managers decided the transponder could be launched as is and no repairs were necessary.

But a second launch try Saturday was called off because of nearby thunderstorms and cloud cover associated with then-Tropical Storm Isaac. NASA managers initially discussed making a third try the next day before deciding to wave off until Thursday to give the weather a chance to improve.

The Atlas then was rolled back to the protection of its processing building and, taking advantage of the opportunity, engineers replaced the C-band transponder. The rocket was rolled back out to the pad on Tuesday.

Discovered in 1958 by the first U.S. science satellite, Explorer 1, the Van Allen radiation belts are defined by Earth’s magnetic field, which traps electrically charged particles from deep space and the sun and shields the planet’s biosphere from their harmful effects.

But the belts pose a threat to astronauts and they can affect sensitive satellite systems and even power grids on Earth when buffeted by powerful solar storms.

Positively charged protons tend to get trapped in an inner belt that begins at the top of the atmosphere and extends out to about 4,000 miles. Negatively charged electrons populate a thicker outer belt that begins at an altitude of about 8,000 miles and extends through 26,000 miles. Powerful electric currents flow as the particles interact with the magnetic field, which can accelerate them to nearly the speed of light.

Where magnetic field lines plunge into the atmosphere near the north and south poles, particles spiraling inward can bounce back out or crash into the upper atmosphere producing spectacular auroral displays. The RBSP satellites are equipped with eight shielded, state-of-the-art instruments designed to precisely measure field strength and particle energies.

“We need eight [instruments] because we’re measuring across this huge energy range,” said Harlan Spence, a principal investigator from the University of New Hampshire. “From particles that are very, very low energy — in our units we talk about going down to one electron volt, very low energy — to particles that are moving near the speed of light at billions of electron volts. A huge energy range we have to cover. We’re looking at protons, electrons, helium and oxygen ions.”

The picture is especially complex, he said, because “charged particles in the presence of a magnetic field have different motions. There’s a gyro motion, the particle will spiral around, gyrate around a magnetic field (line). In a magnetic field geometry that’s narrowing at different locations, they can bounce between these reflection points and lastly, they can drift across the field lines.”

Particles trapped in the radiation belts move in “complicated directions,” Spence said. “Part of our job is to [measure] the directionality. Why do we measure them? Killer electrons are space weather’s villains. They are fantastic things to observe from the point of view of the physics, there’s this cosmic accelerator literally above our heads that’s taking these particles and bringing them near to the speed of light. But they also can inflict damage.”

RBSP, Spence said, “will go right to the scene of the crime to watch the radiation belt particles in action, along with their accomplices. What is it that accelerates these particles? It’s the electric and magnetic fields that determine their quote-unquote bad behavior.”

Along with accelerating charged particles and causing the Van Allen belts to expand, the electric and magnetic fields that define the region can also cause “the radiation belts to decrease, they can cause particles to hit the atmosphere so they’re lost and never come back,” said Craig Kletzing, a principal investigator at the University of Iowa.

“So by measuring these fields, we have the other half of the puzzle, we have the particles and then we have the fields that cause them to change their behavior.”

A better knowledge of the physics driving the radiation belts will improve scientists’ ability to forecast Earth’s space weather and its effects on sensitive electrical systems.

“The outer radiation belts are where all our communication satellites exist, the various things that make sure that GPS works, as well as telephone communications,” Kletzing said in a release. “They can be affected by these particles, and, in fact, it has happened that those satellites have actually been knocked out by radiation.”

As for astronauts, he said, “the various manned missions that NASA has planned to go beyond the space station to places like the moon or Mars also require transiting through this region. Understanding the right time to go, when the particles are fewest so that you don’t impact human health, is a very important thing to understand.”