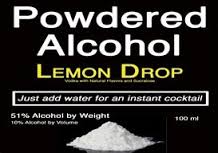 A new brand of powdered alcohol – designed to be mixed into a drink or sprinkled over food – has been signed off by the US government and will be available in autumn of this year.

American drinkers could find themselves sprinkling their favourite beverage rather than pouring it, as powdered alcohol brand ‘Palcohol’ is now fully approved by the US government.

The Alcohol and Tobacco Tax and Trade Bureau this week signed off on seven versions of Palcohol, including Margarita and Cosmopolitan flavours, which will be made available in autumn of this year.

The company’s website, which has been changed since approval from the TTB, pitched the product as a solution to the ever-escalating cost of liquid alcohol.

“What’s worse than going to a concert, sporting event, etc. and having to pay $10, $15, $20 for a mixed drink with tax and tip. Are you kidding me?! Take Palcohol into the venue and enjoy a mixed drink for a fraction of the cost,” the product’s promotional material read.

The site also suggested that users add Palcohol to their food: “Sprinkle Palcohol on almost any dish and give it an extra kick. Some of our favourites are the Kamikaze in guacamole, Rum on a BBQ sandwich, Cosmo on a salad and Vodka on eggs in the morning to start your day off right. Experiment.