Progressive Homeschooling a Crime Against the Holy State 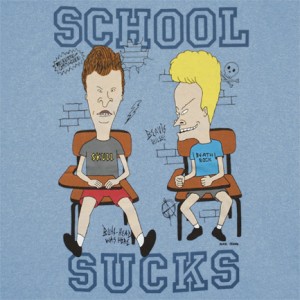 Politically progressive parents who withdraw their children from government schools are ideological hypocrites who undermine the common good, insists Dana Goldstein, a  Schwartz Fellow at the New America Foundation.

In recent years, “there has been a resurgence of interest in homeschooling – not just the religious fundamentalist variety practiced by Michele Bachman and Rick Santorum, but also in secular, liberal homeschooling,” writes Goldstein in an essay for Slate.

Although a definitive tally of the number of home-schooled children is elusive, the best estimate places the “un-schooled” population somewhere in the vicinity of two millions, “and the number is growing. It is unclear home many homeschooling families are secular, but the political scientist Rob Reich has written that there is little doubt that the homeschooling population has diversified in recent years.”

As someone who adheres to the cult of the State as a quasi-divine entity that is the source of all good things, Goldstein is troubled that the individualist heresy has taken root among self-described progressives. Homeschooling “is rooted in distrust of the public sphere, in class privilege, and in the dated presumption that children hail from two-parent families, in which one parent can afford (and wants) to take significant time away from paid work in order to manage a process – education – that most parents entrust to the community-at-large,” she writes with a palpable sense of disgust.

For the devout collectivist, the question is not whether homeschooling “best serve[s] the interests not just of those who are doing it, but of society as a whole,” according to Goldstein. Furthermore, it’s entirely inappropriate to “encourage children to trust only their parents or those hand-selected by them, and to mistrust civic life and public institutions…. Nor can we allow homeschoolers to believe their choice impacts only their own offspring.” Removing intellectually capable children from the government school environment undermines the “peer effects” created in the classroom setting, thereby supposedly making it “harder for less-advantaged children to thrive.”

For all of these reasons, Goldstein writes in a scolding tone, “Lefty homeschoolers might be preaching sound social values to their children, but they aren’t practicing them.”

For centuries, wrote the late social commentator  Christopher Lasch (who in his youth was a Marxist) in his book The True and Only Heaven, social engineers have “sought to remove children from the influence of their families … and to place them under the benign influence of state and school.” This is true not only of Dana Goldstein’s ideological ancestors among 19th and early 20th century American progressives, but among her ideological kindred in the Soviet Union.

In his 1937 work A Book for Parents, Soviet sociologist A.S. Makarenko–at the time a personal favorite of Josef Stalin–wrote that the Soviet family “is not a closed-in, collective body, like the bourgeois family. It is an organic part of Soviet society….” While “parents are not without authority” in the Soviet system, “this authority is only the reflection of social authority,” insisted Makarenko.

Not surprisingly, given his role as a functionary in a state apparatus devoted to the extirpation of religious belief, Makarenko explicitly repudiated the biblical foundations of parental authority, stating that in the pre-socialist world “parental authority issued from the Lord’s commandment. In our modern family things are different.” He denounced the pre-socialist father as an “odious figure”–”Master, overseer, teacher, judge and sometimes executioner,” “despotic,” a monarch who exploited his children. He taught that the State—the institutional arrangement that made it possible for Stalin to annihilate slaughtered tens of millions–must forbid parental physical punishment and “maternal indulgence.” This wasn’t because Makarenko had moral objections to corporal punishment, but rather because allowing such displays of limited punitive authority would undermine the State’s monopoly on force.

The family’s purpose in the Soviet system was to raise the State’s children according to the State’s dictates. “Morality requires general emulation of the most perfect conduct,” wrote Makarenko. “Our morality must already be the morality of communist society…. In our country he alone is a man of worth whose needs and desires are the needs and desires of a collectivist. Our family offers rich soil for the cultivation of such collectivism.”

Thirty years after publication of Makarenko’s book in the Soviet Union, it was published in the United States under the title The Collective Family: A Handbook for Russian Parents. The introduction in the English-language edition was written by Russian expatriate Urie Bronfenbrenner, who at the time (1967) was a member of the Planning Committee for the Head Start program. According to Bronfenbrenner, the wisdom offered in Makarenko’s Soviet handbook should help shape American social policy:

The Collective Family … has something to say to the Western world…. Soviet leaders and educators have emphasized that effective character training requires imposing on the child challenging responsibilities for service and self-discipline not only within the family but, equally importantly, in his collective or peer group both within and outside the school.

The vision that enchanted Bronfenbrenner, and inspired generations of American educators, bureaucrats, and social engineers, was laid out with remarkable clarity at a Communist Party Congress held shortly after the Bolshevik Revolution. In that gathering (as recounted in the 1986 book Utopia in Power: A History of the Soviet Union from 1917 to the Present, by Russian expatriate scholars Mikhail Heller and Aleksandr Nekrich), Soviet educators were told: “We must remove the children from the crude influence of their families. We must take them over and, to speak frankly, nationalize them. From the first days of their lives they will be under the healthy influence of Communist children’s nurseries and schools. There they will grow up to be real Communists.”

The American social welfare revolution of the past five decades has followed precisely the same course. Home school families constitute a counter-revolution – and, increasingly, their ranks include disillusioned “Lefty” parents who commendably place a higher value on the practical education of their own children than the theoretical best interests of the “community-at-large.”

Posted in Academic | Leave a response