Skip to content
HomeScience/TechRobots to Get Internet Cloud Brain: “Wikipedia For Robots” 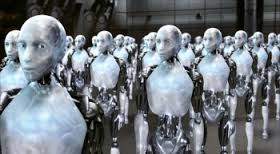 Some of us humans have become concerned about neuroscience research conducted under Obama’s BRAIN project, as well as similar research sponsored by the European Union in even greater amounts of money – it exceeds $1 billion combined. The goal is nothing short of decoding the human brain and discovering new ways to develop both narrative and pharmaceutical mind control.

Running parallel to this initiative is the marriage of robotics with artificial intelligence. The evolution of the humanoid robot is advancing by baby steps, but is coming of age rather quickly; so much so, that many experts see humans completely outsourced to robots by 2045 at the latest.

The most recent development sought by the European Union is even more startling: a cloud network where robots can do their own research, communicate with one another, and collectively increase their intelligence in a full simulation of human interaction.

I really wish I was making this up…

The project name makes it clear where the final frontier lies: RoboEarth. A team of scientists from 6 research institutes including Philips electronics and Eindhoven University of Technology in the Netherlands have developed a prototype for an Internet “Wikipedia For Robots,”

The project seeks to create robots’ very own cloud: a vast network, database and computation engine “where robots can share information and learn from each other about their behavior and their environment.”

RoboEarth, then, is cloud storage and computing for robots: its database is intended to store knowledge created by both humans and robots in a robot-readable open format. To date, that knowledge is basic: maps to help mobile robots navigate; task information like how to pick up a cup; and object-recognition data such as digital models of real-world objects.

Currently the problem, according to robotics engineers, is that robots can perform well in very limited tasks, as directed, but do not perform well where environments require real-time problem solving and the split-second adaptability that humans can perform. This was made painfully clear in the well-funded DARPA Robotics Challenge, where even the winner was nothing more than a lumbering shell of clunking mechanics that could demonstrate brawn but not brains.

And while artificial intelligence has come a long way in raw power to match and even exceed the computational abilities of humans, there is still something severely lacking. The RoboEarth project believes it has identified that lacking component that could give “life” to robots: family learning – essentially the nurture part of the equation where nature can only be mimicked. Once established, some of the autonomous functions that have been implemented will transcend beyond merely self-directed communication, and will enter the sphere of evolutionary intelligence. Also employing the Internet of Things, researchers present the following scenario:

RoboEarth’s proof-of-concept demonstration is simple for humans, but hard for robots: serve fruit juice to a random patient in a hospital bed. In a fake hospital room at Eindhoven Technical University in the Netherlands, one robot mapped out the space, located the “patient’s” bed and a nearby carton of juice, then sent that data to RoboEarth’s cloud.

A second robot, accessing the data supplied by robot number one, unerringly picked up the juice and carried it to the bed.

Luckily – or unfortunately from the researchers’ point of view – the test ultimately failed when the juice was dropped on the way to the patient. Nevertheless, the concept of robotic cloud data transmission and access was seen as a success. This is all being imagined as a way to introduce the concept of robotic family caregivers:

The greying population means there is an urgent future need for robots to take over caring or household tasks. To enable robots to successfully lend a mechanical helping hand, they need to be able to deal flexibly with new situations and conditions. For example you can teach a robot to bring you a cup of coffee in the living room, but if some of the chairs have been moved the robot won’t be able to find you any longer. Or it may get confused if you’ve just bought a different set of coffee cups. (Source)

Learning from others is one of the ways that humans (and other sentient life forms) avoid a very dangerous and often inefficient route to developing their abilities beyond those of an autonomic type.

For those of us who are intrigued by the power of technology and would like to see it manifest in the most beneficial ways possible, this is one more sign that we must become involved in the dialogue of how this will ultimately be applied.

Here are just a few questions to consider; please add your own in the comment section.