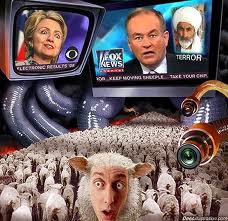 Ever wondered why some people who seem otherwise educated on all other fronts appear hopelessly trapped in the left-right paradigm?

Yale law professor Dan Kahan put together a study which essentially found that people were less likely to choose a mathematically correct answer if it went against their political beliefs. To boil it down, groups were given fake data about skin cream efficacy and asked to solve a math problem. When the same exact data was given in the context of gun control, intelligent people gave wildly different answers based on their political beliefs instead of reality.

In other words, liberals and conservatives alike openly allowed politics to skew their own basic capacity for reasoning.

“If the wrong answer is contrary to their ideological positions, we hypothesize that that is going to create the incentive to scrutinize that information and figure out another way to understand it,” says Kahan. In other words, more numerate people perform better when identifying study results that support their views — but may have a big blind spot when it comes to identifying results that undermine those views.

What’s happening when highly numerate liberals and conservatives actually get it wrong? Either they’re intuiting an incorrect answer that is politically convenient and feels right to them, leading them to inquire no further — or else they’re stopping to calculate the correct answer, but then refusing to accept it and coming up with some elaborate reason why 1 + 1 doesn’t equal 2 in this particular instance.

So people can and will lie to themselves if it fits their political beliefs. In essence, this shows us that buying into the political divide blinds people to the reality that, year after year, nothing Uncle Sam does ever really changes (and when it doesn’t change, it’s the other party’s fault).

This is why you can argue with someone all day and present as many facts as you like to prove that, ultimately, the American government is just…broken. Irreparably damaged. Hijacked.

You can waste your time spending hour after hour carefully laying out the fact that President Obama, for all his oratory puffery and Nobel Prize bling, has only advanced the agendas of George W. Bush, and Bush Jr. only really continued those of Clinton, who really only furthered the policies Bush Sr. put in place. Each time the American people misplace their faith and a shiny new face gets slapped on the same old worn out puppet. People are mired in the bog of eternal left-right paradigm stench.

It’s glorified Dr. Seuss’ bee watch watchers, except these guys get to run around in suits playing with trillions of dollars in fake money all day, making decisions that ultimately impact all of our lives and all the while, somewhere in the background, the dwindling middle class is becoming the new poor, and while that poor just keep getting poorer, the rich have kept on getting richer the whole time.

(Interesting side fact: the income gap between the rich and poor is the greatest it has been in 100 years, or since the Federal Reserve was created.)

The line “Meet the new boss, same as the old boss” from The Who tune “Won’t Get Fooled Again” has pretty much been literally applied to the U.S. government since the band wrote it in 1971. (Well, to get technical, it goes back to JFK’s assassination…)

None of these bread and circuses concerns what the people want or need. Big government is booming and the bang is only going to get louder until we all go deaf. Rest assured whoever graces the White House in 2016, that person will only make it there if they play the game. It’s called Oligopoly, created by bankers and megacorporations for bankers and megacorporations.

So next time someone says it isn’t Obama’s fault that everything sucks, he was just left holding Bush Jr.’s bag, remember the next person to grace the podium will be holding whatever is left of Obama’s bag in a couple more years and no matter which side of the aisle you choose to sit on at the inauguration, whether or not you like red or blue better, rest assured the turd sandwiches churned out by the United Corporations of America will still continue to taste like shit…no matter how you fudge the math.