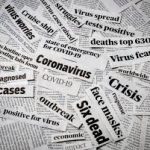 The CIA and the News Media 2.0

The CIA’s infiltration of the news media, from Wisner’s Wurlitzer and the CIA’s global propaganda network to the Church Committee revelations and the CIA whistleblowers of the 1980s.

The CIA Is Deep Into Cryptocurrency, Director Reveals

There’s a long-running conspiracy theory among a small number of cryptocurrency enthusiasts that Bitcoin’s anonymous inventor, Satoshi Nakamoto, was actually the CIA or another three-lettered agency.