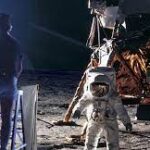 A New Mexico man has made a series of astonishing confessions since he was diagnosed with terminal cancer and told he has months to live. He claims the moon landing was faked by the US government with the footage shot at a military base and the surface of the moon recreated with sand and cement powder.