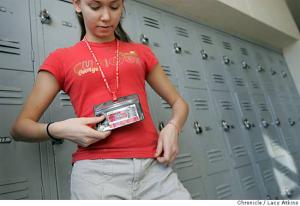 Northside Independent School District plans to track students next year on two of its campuses using technology implanted in their student identification cards in a trial that could eventually include all 112 of its schools and all of its nearly 100,000 students.

District officials said the Radio Frequency Identification System (RFID) tags would improve safety by allowing them to locate students — and count them more accurately at the beginning of the school day to help offset cuts in state funding, which is partly based on attendance.

Northside, the largest school district in Bexar County, plans to modify the ID cards next year for all students attending John Jay High School, Anson Jones Middle School and all special education students who ride district buses. That will add up to about 6,290 students.

The school board unanimously approved the program late Tuesday but, in a rarity for Northside trustees, they hotly debated it first, with some questioning it on privacy grounds.

State officials and national school safety experts said the technology was introduced in the past decade but has not been widely adopted. Northside’s deputy superintendent of administration, Brian Woods, who will take over as superintendent in July, defended the use of RFID chips at Tuesday’s meeting, comparing it to security cameras. He stressed that the program is only a pilot and not permanent.

“We want to harness the power of (the) technology to make schools safer, know where our students are all the time in a school, and increase revenues,” district spokesman Pascual Gonzalez said. “Parents expect that we always know where their children are, and this technology will help us do that.”

Chip readers on campuses and on school buses can detect a student’s location but can’t track them once they leave school property. Only authorized administrative officials will have access to the information, Gonzalez said.

“This way we can see if a student is at the nurse’s office or elsewhere on campus, when they normally are counted for attendance in first period,” he said.

Gonzalez said the district plans to send letters to parents whose students are getting the the RFID-tagged ID cards. He said officials understand that students could leave the card somewhere, throwing off the system. They cost $15 each, and if lost, a student will have to pay for a new one.

Parents interviewed outside Jay and Jones as they picked up their children Thursday were either supportive, skeptical or offended.

Veronica Valdorrinos said she would be OK if the school tracks her daughter, a senior at Jay, as she always fears for her safety. Ricardo and Juanita Roman, who have two daughters there, said they didn’t like that Jay was targeted.

Some parents said they understood the benefits but had reservations over privacy.

“I would hope teachers can help motivate students to be in their seats instead of the district having to do this,” said Margaret Luna, whose eighth-grade granddaughter at Jones will go to Jay next year. “But I guess this is what happens when you don’t have enough money.”

The district plans to spend $525,065 to implement the pilot program and $136,005 per year to run it, but it will more than pay for itself, predicted Steve Bassett, Northside’s assistant superintendent for budget and finance. If successful, Northside would get $1.7 million next year from both higher attendance and Medicaid reimbursements for busing special education students, he said.

But the payoff could be a lot bigger if the program goes districtwide, Bassett said.

He said the program was one way the growing district could respond to the Legislature’s cuts in state education funding. Northside trimmed its budget last year by $61.4 million.

Two school districts in the Houston area — Spring and Santa Fe ISDs — have used the technology for several years and have reported gains of hundreds of thousands of dollars in revenue for improved attendance. Spring ISD spokeswoman Karen Garrison said the district, one-third the size of Northside, hasn’t had any parent backlash.

In Tuesday’s board debate, trustee M’Lissa M. Chumbley said she worried that parents might feel the technology violated their children’s privacy rights. She didn’t want administrators tracking teachers’ every move if they end up outfitted with the tags, she added.

“I think this is overstepping our bounds and is inappropriate,” Chumbley said. “I’m honestly uncomfortable about this.”

Northside has to walk a tightrope in selling the idea to parents, some of whom could be turned off by the revenue incentive, said Kenneth Trump, president of National School Safety and Security Services, a Cleveland-based consulting firm.

The American Civil Liberties Union fought the use of the technology in 2005 at a rural elementary school in California and helped get the program canceled, said Kirsten Bokenkamp, an ACLU spokeswoman in Texas. She said concerns about the tags include privacy and the risks of identity theft or kidnapping if somebody hacks into the system.

Texas Education Agency spokeswoman DeEtta Culbertson said no state law or policy regulates the use of such devices and the decision is up to local districts.