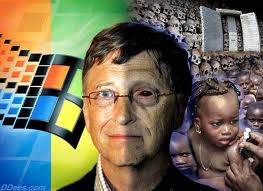 With an endowment larger than all but four of the world’s largest hedge funds, the Bill & Melinda Gates Foundation is easily one of the most powerful charities in the world.

According to its website, the organization “works to help all people lead healthy, productive lives.” So how do the investments of the foundation’s $36 billion investing arm, the Gates Foundation Trust, match up to its mission? We dug into the group’s recently released 2012 tax returns to find out.

The Gates Foundation did not respond to requests for comment; however, its investment policy says the the trust’s managers “consider other issues beyond corporate profits, including the values that drive the foundation’s work.”

In its most recent annual report to investors, private prison company GEO group listed some risks to its bottom line, including “reductions in crime rates” that “could lead to reductions in arrests, convictions and sentences,” along with immigration reform and the decriminalization of drugs. Military contractor DynCorp, meanwhile, has faced allegations of fraud, mismanagement, and even slavery from the Middle East to Eastern Europe.