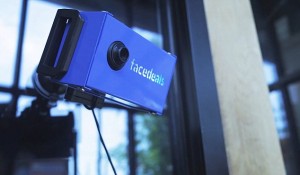 Shoppers could soon be automatically recognised when they walk into a shop using a controversial new camera.

Called Facedeals, the camera uses photos uploaded to Facebook to recognise people as they walk in.

Shoppers who agree to use the system, which has not been developed with Facebook, will be offered special deals.

A promotional video created to promote the concept shows drinkers entering a bar, and then being offerend cheap drinks as they are recognised.

They are already trialling the scheme in firms close to their office.

‘A search for businesses with active deals in our area turned up a measly six offers.

‘The odds we’ll ever be at one of those six spots are low (a strip club and photography studio among them), and the incentives for a check-in are not nearly enticing enough for us to take the time.

‘So we set out to evolve the check-in and sweeten the deal, making both irresistible.

‘We call it Facedeals.’

Facebook recently hit the headlines when it bought face.com, an Israeli firm that pioneered the use of face recognition technology online.

The social networking giant uses the software to recognise people in uploaded pictures, allowing it to accurately spot friends.

This verifies your most recent photo tags and maps the biometric data of your face.

The system then learns what a user looks like as more pictures are approved.

This data is then used to identify you in the real world.