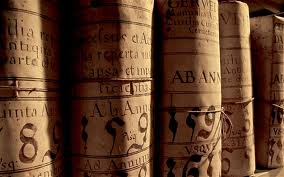 As the confidential correspondence of popes, princes and potentates, the Vatican Secret Archives have been jealously guarded for centuries.

But now 100 of the most historically significant documents held by the Vatican’s Secret Archives are to go on public display in Rome – the first and probably last time that they will leave the buttressed stone walls of the tiny city state.

The priceless documents span more than a millennium, from the 8th century to modern times, and feature a cast of historical characters ranging from the Knights Templar to Galileo, Martin Luther and Henry VIII.

They are normally kept in air-conditioned, climate-controlled rooms in the Vatican’s Apostolic Palace, which boasts more than 50 miles of shelves, as well as in a high-security underground bunker.

Archivists have gathered them together for an unprecedented exhibition, to be held in Rome’s Capitoline Museums, to celebrate the 400th anniversary of the founding of the Secret Archives in their present form.

“It’s an exceptional event,” Father Federico Lombardi, the Vatican’s spokesman, told The Daily Telegraph. “It’s the first time that an exhibition of such significance has been organised. Never have so many documents from the Secret Archive been allowed to leave the Vatican.”

Organisers of the exhibition said it will be “a unique and once-in-a-lifetime event recounting history through its sources.”

Papal documents have been kept ever since the Church was founded, but the Secret Archives have occupied their present location only since 1612, when the repository was reorganised by Pope Paul V.

One of the most interesting documents for British visitors will be a letter written by Mary Queen of Scots a few weeks before her execution for alleged involvement in plots to have Elizabeth I assassinated.

Mary, a rallying point for the Catholic cause, wrote the letter in French to Pope Sixtus V from Fotheringay Castle in Northants in Nov 1586.

The letter, in black ink on yellowing parchment, professes her adherence to the “universal” Catholic Church of Rome, railed against the falsehoods perpetrated by her enemies in England and claimed that the tribunal which had condemned her to death was illegitimate and heretical.

Fully aware that she had been condemned to death, she recounted the suffering she had undergone during nearly 20 years of imprisonment.

An appeal by Parliament asking the Pope to annul Henry VIII’s marriage to Catherine of Aragon will also be in the collection.

The parchment document, which bears the red wax seals of more than 80 English lords, cardinals and bishops, was sent to Pope Clement VII in 1530 but failed to resolve the dispute, which eventually led to a schism and the founding of the Church of England.

It will be displayed alongside documents from the heresy trial of Galileo Galilei, whose theory that the Earth revolved around the Sun was regarded as heresy by the Catholic Church in the early 17th century.

One of the documents bears the signature of the astronomer, who was hauled in front of the Inquisition in 1633 and had his books banned.

Among the more unusual documents is a letter written on silk in 1650 by a Chinese empress who pledged her allegiance to Catholicism after being converted by Jesuit priests.

The letter, rolled up in a bamboo scroll, was sent by the empress dowager Wang, who adopted the Christian name Helena, to Pope Innocent X in 1650.

There will also be previously unseen documents relating to Pope Pius XII, who has been accused of not doing enough to speak out about the Holocaust during the Second World War.

The Vatican has until now stubbornly resisted calls from historians and Jewish groups to release papers from Pius’s controversial papacy, from 1939 to 1958.

All the documents are stamped with the words ‘Archivio Segreto Vaticano’, although the organisers of the exhibition point out that the Latin word ‘secretum’ more accurately translates as ‘private’ – these are the private archives of the popes.

The exhibition, called “Lux in Arcana: The Vatican Secret Archives Revealed”, runs from February to September 2012 in the Capitoline Museums.