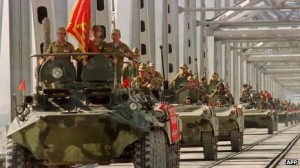 The education ministry has endorsed a new history curriculum for school students that deletes nearly four decades of the country’s war-torn past.

The government says textbooks based on the new curriculum will help bring unity in a country traditionally polarised along ethnic and political lines.

But critics accuse ministers of trying to appease the Taliban and other powerful groups by erasing history that portrays them in a bad light. They say the government is trying to win over the Taliban before Nato and US forces leave the country.

Afghanistan is entering a hugely uncertain time post-Nato, during which tricky arrangements with the Taliban and other players are expected.

‘No mention of the misery’

The past 40 years in Afghanistan have been some of the most turbulent of any country in the world.

But the bloody coups of the 1970s, the 1979 Soviet invasion, the Moscow-backed communist regimes in Kabul and countless human rights excesses committed by secret police have all been erased from the history curriculum, critics say.

Nor is there much mention of the bloody civil war between mujahideen factions that tore Kabul apart in the 1990s, leaving an estimated 70,000 people dead.

That conflict gave rise to the Taliban – but there is not much mention of them either, or the US-led forces that drove them from power and have stayed for more than a decade.

An Afghan journalist, who did not wish to be identified for security reasons, told the BBC he was surprised the civil war and the Taliban regime had been wrapped up in just a few lines.

“There is no mention of the US and Nato presence. It is as if someone is trying to hide the sun with two fingers.”

The education ministry denies suggestions that foreigners had any role in devising the new curriculum, and US military officials say they had no discussions on content in the books, some of which were paid for with US money.

But a spokesman for the US military in Kabul, David Lakin, added: ”Our cultural advisers reviewed the social studies textbooks for inappropriate material, such as inciting violence or religious discrimination.”

The BBC visited two schools just outside Kabul where the new books have been introduced.

If students will not learn about past violence, how will they avoid it in future?” ”

At one – Sarubi High School, 75km (40 miles) from Kabul – I sat in on a class and listened as a teacher asked one of his grade six students to read from his glossy new history textbook.

The chapter was on Sardar Mohammad Daud Khan, prime minister from 1953-63 and the country’s president 10 years later.

The chapter talks about Daud Khan’s rise but is silent on the full details of how he overthrew the monarchy of his first cousin, Mohammed Zahir Shah.

The following chapters, too, make no mention of the numerous bloody coups that unsettled the country’s political landscape, the Moscow-backed regimes including that of President Najibullah, the civil war that began after his resignation or the rise in 1996 of the Taliban and their subsequent fall.

“What happened in Sarubi during the Soviet invasion?” I asked 11-year-old Muslim, who was listening diligently to his classmate.

”The Russians wanted to remove Islam from Afghanistan. A lot of people got killed, villages were bombed. Millions were forced to take refuge in Pakistan,” the boy says.

“How do you know? This information doesn’t exist in your history book.”

“My parents and teachers told me,” he says innocently.

The teacher, who also requested anonymity, says the new textbooks will deprive knowledge of the past to an entire generation.

“Since internet penetration is low and contact with the outside world is limited, children in Afghanistan are more dependent on textbooks than anywhere else in the world,” he said.

“But now that the government has decided to delete the past 40 turbulent years from history books, millions of children will never know why and how the Afghanistan we live in came to be.”

Like Sarubi, the Shomali plains north of Kabul also suffered the excesses of the Soviet Red Army and then the Taliban.

The bustling town of Charikar, just off the main road, was until 12 years ago a picture of devastation. Accused of supporting the Northern Alliance, the town bore the brunt of Taliban violence.

But the Taliban’s “scorched earth” policy finds no mention in the new history textbooks either.

‘For students it is important to study every political regime whether its rule was good or bad,” Mr Qudoas said.

“One of the primary objectives of studying history is not to repeat past mistakes. If students will not learn about past violence, how will they avoid it in future?”

Education Minister Farooq Wardak says the decision to delete part of history from the books is based on the larger interest of the country.

“There are hundreds and thousands of issues over which there is disagreement in the nation,” he told the BBC.

“My responsibility is to bring unity not disunity in the country. I am not going to encourage a divisive education agenda.

”Now, if I am writing something over which there is no national consensus – I am taking the disagreement, even the war to the class, and school of Afghanistan. I will never do that.”

But for many others, what has been done to the curriculum is simply “deception”. How can you move forward if you brush your past under the carpet and don’t confront it, such critics argue.

“Kabul was destroyed during the civil war, thousands of people were killed,” said a female member of parliament, also on condition of anonymity.

“During the Taliban rule atrocities were committed on females. They were prohibited from working or going to school. Hundreds of women were stoned to death for alleged adultery. None of this finds a place in textbooks. Are we not hiding the truth from the children of this country?”