We’ve gone on at great lengths discussing the dangers of genetic modification. Monsanto’s GMO corn has been linked to weight gain and organ function disruption, while GMO crops and pesticides destroy our farmland and environment. According to the Alliance of Natural Health, the grandchildren of rats fed GMO corn were born sterile. GMO is just […] 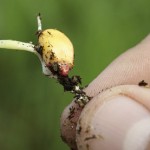 Monsanto plans massive biotech experiment in the US

The US government has for the first time signed off on a large-scale experiment involving genetically modified crops, which will lead to biotech big shot Monsanto introducing an engineered corn seed across America from South Dakota to Texas. The Monsanto Corporation has been given the go-ahead to test out a man-made corn variant that they […]

How one of the world’s wealthiest men is actively promoting a corporate takeover of global agriculture. After it was exposed that the Bill & Melinda Gates Foundation, the philanthropic brainchild of Microsoft founder Bill Gates, purchased 500,000 shares in Monsanto back in 2010 valued at more than $23 million, it became abundantly clear that this so-called benevolent charity […]