Skip to content
HomeGlobalismMonsantoMonsanto plans massive biotech experiment in the US 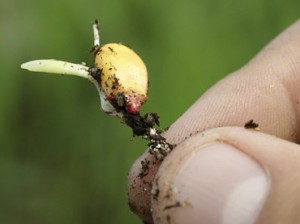 The US government has for the first time signed off on a large-scale experiment involving genetically modified crops, which will lead to biotech big shot Monsanto introducing an engineered corn seed across America from South Dakota to Texas.

The Monsanto Corporation has been given the go-ahead to test out a man-made corn variant that they claim can thrive in dry, unfavorable conditions. With much of the American south and southwest experiencing abnormally arid conditions, the freak-seed could revitalize a chunk of the nation’s agriculture.

More likely, however, is that a success will mean revitalization in terms of Monsanto’s profits and not much more.

The government has agreed to let Monsanto test out the biotech crop on farms owned by the company from the state of South Dakota down through Texas to see if the seed stands to be commercially viable; if so, it is expected to be made available for purchase in 2013. With America’s small-time agriculturists in danger — and already largely threatened by industry giant Monsanto — a success for the seed could see yet more farmers finding themselves unable to compete and forced to throw in the towel.

Monsanto has in recent years attracted criticism for questionable legal practices after it has introduced lawsuits against small-time farmers for the unauthorized use of genetically-modified crops patented by the corporation. In many instances, it is believed that the smaller farms in question only ended up with Monsanto seeds due to wind, rodents and other forces of nature bringing the crops across corporate farms and onto their own terrain. Unable to compete against Monsanto in court, however, the company has time-and-time-again bought out its competition and, as a result, made great strides as of late in terms of monopolizing the seed biz.

Last month Jim Gerritsen, president of the Organic Seed Growers and Trade Association, issued a statement saying he and others were serious about saving farms from being forced to close due to corporate muscling. “Monsanto’s threats and abuse of family farmers stops here,” said Gerritsen. “Monsanto’s genetic contamination of organic seed and organic crops ends now. Americans have the right to choice in the marketplace — to decide what kind of food they will feed their families — and we are taking this action on their behalf to protect that right to choose.”

Around 300,000 organic farmers are currently awaiting a court decision to see if a US District Court will hear a lawsuit against Monsanto that, if successful, will keep the company from continuing to sue small-time agriculturists. Between 1997 and 2010, Monsanto tackled 144 organic farms with lawsuits and investigated roughly 500 plantations annually during that span with their so-called “seed police.” Gerritsen and others want to see to it that Monsanto can’t do that anymore, but if they are denied a day in court and the new corn crop prevails, it could soon be the final curtain call for many of America’s independent farmers.

Governmental approval of the modified crop marks the first time that the US Department of Agriculture’s Animal and Plant Health Inspection Service has okayed a product that has been genetically engineered to resist a weather condition such as a drought, rather than a pest or herbicide. Acting on concerns that Washington has been overly encouraging to Monsanto as they force farms into foreclosure, US-based non-profit group Public Employees for Environmental Responsibility went after the White House recently for ignoring Freedom of Information Act requests. Members of PEER suspect that if they can come into possession of certain correspondence, they can link the Obama administration to key lobbyists for Monsanto.

Protesters with the Occupy Wall Street movement in the region Monsanto plans to test its new seed are holding a conference this weekend in St. Louis, dubbed Occupy Midwest. Members of the group say they intend on waging a demonstration against Monsanto, which has offices in the area.