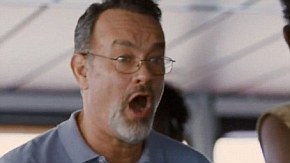 It’s made for Hollywood: the story of an average American family man, captain of a cargo ship in dangerous waters, his vessel overtaken by armed Somali pirates demanding ransom, saving his crew by allowing himself to be removed from the boat and taken hostage.

All of this is the basis for “Captain Phillips,” starring Tom Hanks as the titular, real-life hero. The only problem, say some members of the real Capt. Phillips’ crew, is none of it is true.

Capt. Richard Phillips, they say, is no hero, and the film is one big lie.

“Phillips wasn’t the big leader like he is in the movie,” says one crew member, who, for legal reasons, spoke with The Post anonymously. He worked very closely with Phillips on the Maersk Alabama and was alarmed by his behavior from the beginning. Phillips, he says, had a bad reputation for at least 12 years prior, known as a sullen and self-righteous captain.

“No one wants to sail with him,” he says.