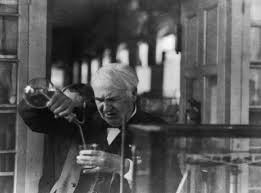 Thomas Edison did not try 10,000 times before inventing the light bulb, nor did he labor in a dusty workshop by himself.

That’s according to David Burkus, author of “The Myths of Creativity,” who says America’s favorite innovation story may have been the result of a tremendous publicity push.

In his book, Burkus debunks the popular tale of Edison and what he calls the “lone creator myth.” His claim? That we love the story of the solo-genius, the starving artist, the one brilliant man against the world — even if it’s not always true.

In the case of Edison, Burkus argues that the famous creator didn’t invent the light bulb so much as perfect it, with the muscle of a massive publicity machine behind him. Edison’s main laboratory, built in a rural New Jersey town called Menlo Park, was famous for generating more than 400 patents in just six years. That rapid clip made it known as the “invention factory” and established the popular image of Edison tinkering late into the night.

What’s less well known, Burkus claims, is that Edison worked with a team of 14 or so engineers, machinists, and physicists — collectively known as “muckers.” The muckers resided on the upper floors of the Menlo Park warehouse while Edison split his time between inventing, dealing with clients and investors, and speaking to the press.

“The muckers at Menlo Park were such a fertile source of ideas that it seems odd that their presence is typically dropped from the story,” Burkus writes. “But this isn’t a coincidence. It was by design.”

“As their work progressed,” he continues, “the team of muckers quickly realized the power behind Edison’s name. They found that when they advertised their ideas or tried to sell themselves to potential clients, their audience seemed to like the notion that a single individual had authorship of their ideas, especially when that person was Edison.”

In short, the muckers created Edison, the archetypal inventor. They saw that Edison by himself made for a more valuable brand than their collective group, and capitalized on that by mythologizing him.