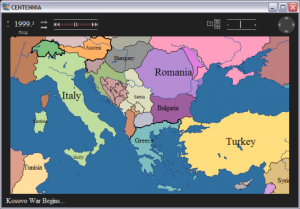 Pretty crazy how many changes happened in the last 1000 years, compared to the (relative) stability of recent history.

Centennia is a map-based guide to the history of Europe and the Middle East from the beginning of the 11th century to the present. It is a dynamic, animated historical atlas including over 9,000 border changes. The map controls evolve the map forward or backward in time bringing the static map to life.

The maps also display every major war and territorial conflict displaying the status of each region at intervals of a tenth of a year, and reflect actual “power on the ground” rather than internationally-sanctioned or “recognized” borders.