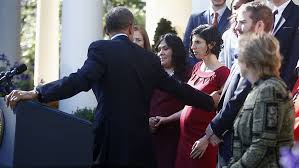 First of all, who in their right mind asked a pregnant woman to stand up in front of hundreds of photographers for a significant amount of time?

Secondly, take a closer look at the video. After turning to the woman, Obama actually turns back toward the microphone, raises his voice and says “I’ve got you.” He then turns back to her, turns back to the mic and again says “You’re ok.”

Who is he addressing? The woman who is behind him or the world’s press in front of him?

The quip then followed, “This is what happens when I talk too long.”

And cue the pandering ovation.

The president then wrapped up the speech within a minute of the unidentified woman being led away.

But, this is not the first time this has happened… or the second time… or the third time… or the fourth time… It happens ALL THE TIME. He pretty much has a prepared speech that he repeats.

2) A person is so overcome with being in Obama’s presence that the person faints. Usually more than one person faints, often many.

3) Obama pauses his speech to alert paramedics and EMTs to the fainting person or people.

4) Obama asks if anyone has water and then offers his own bottle of water.

5) Obama offers medical advice (i.e. give the fainted person some room to breathe, get the person some water, make room for the paramedics)

6) Obama pronounces the fainter as fine. How would Obama know that? That person could have had a heart attack, but somehow Obama knew these people were all okay.

7) At the most recent fainting episode in Maryland on October 7, 2010, the temperature was 74 degrees. Yet reports had two dozen people fainting during that speech. How is that possible? This was a speech to young college kids.

Does anyone remember people fainting at speeches being delivered by other Presidents — much less the epidemic of faintings that happen at Obama’s speeches?

James Taranto of the The Wall Street Journal in 2008 raised the issue, cataloging instances of fainting at Obama’s speeches that looked suspicious even way back then. Here’s part of Taranto’s report:

• Hartford, Conn., Feb. 4, 2008. “And when a woman appeared to faint in the standing-only VIP section in front of the podium, Obama paused his speech for over a minute as he directed the crowd to make way for an EMT team and tossed a bottle of water from the stage,” reported the Yale Daily News.

• Seattle, Feb. 8, 2008. “Climate change, the Iraq war and Obama tossing a bottle of water to a woman about to faint all received big cheers,” MSNBC.com reported. “As Obama told the crowd to part so that the woman in question could leave and called for help, a young girl in the crowd shouted out, ‘What a man!’ The audience roared with laughter (although the press that has seen this happen before rolled its eyes).”

Obama knows he and his party are in trouble, so is resorting to his old tricks again — trying to reignite the old magic.

So these faintings are all part of the act and are scripted on Obama’s teleprompter.

This also appears to be part of Obama’s broader effort to set himself up as some kind of quasi-religious or Messianic figure. It’s the kind of egocentric, self-aggrandizing behavior that’s straight out of the tyrant’s handbook.