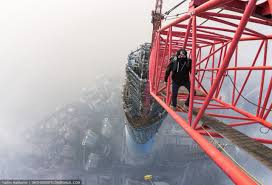 BEIJING – It was Chinese New Year Day (Jan. 31) in Shanghai and the much of the city had emptied out for the week-long holidays, including most of the construction workers and security guards at the unfinished 2,100-foot-tall Shanghai Tower.

Just after midnight, two daredevil friends, Vadim Makhorov, 24, from Russia and Vitaliy Raskalov, 21, from Ukraine, snuck past the remaining guards. Their goal: to climb the world’s second-tallest building and record the experience for everyone to see.

Armed with GoPros and DSLR cameras, and evading security, the pair scaled all the way to the top of tower, even climbing higher, to the end of a construction crane.

This week, they released a thrilling, vertigo-inducing video that is quickly going viral.

“I’ve been on a lot of roofs,” Rasklalov told ABC News from Bangkok. “But this was the most beautiful. When I saw just the two other buildings sticking up from the clouds, it was like flying in a plane. It was [expletive] awesome!”

Raskalov and Makhorov are at the forefront of an increasing popular craze among Russian youths called “skywalking,” or “roofing.”

Posted in The Media Matrix | Leave a response