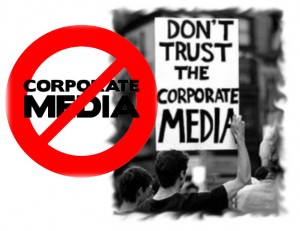 People frequently refer to a court case that Fox won, which essentially gives the media the right to lie. This came from an appellate court decision that states that the FCC’s news distortion policy does not qualify as a rule, law, or regulation.

Jane Akre and her husband Steve Wilson are former employees of Fox owned-and-operated station WTVT in Tampa, Florida. In 1997, they were fired from the station after refusing to knowingly include false information in their report concerning the Monsanto Company’s production of RBGH, a drug designed to make cows produce more milk. They successfully sued under Florida’s whistle blower law and were awarded a US $425,000 settlement by jury decision. However, Fox appealed to an appellate court and won, after the court declared that the FCC policy against falsification that Fox violated was just a policy and not a “law, rule, or regulation”, and so the whistle blower law did not apply.

The court agreed with WTVT’s (Fox) argument “that the FCC’s policy against the intentional falsification of the news — which the FCC has called its “news distortion policy” — does not qualify as the required “law, rule, or regulation” under section 448.102.[…] Because the FCC’s news distortion policy is not a “law, rule, or regulation” under section 448.102, Akre has failed to state a claim under the whistle-blower’s statute.”[1]

In 2001, Jane Akre and her husband won the Goldman Environmental Prize as a recognition for their report on RBGH. [2]

In 2004, Fox filed a US$1.7 million counter-suit against Akre and Wilson for trial fees and costs. Akre and Wilson both appear in a major portion of the 2004/5 critical documentary, The Corporation.

In 2007 Jane became the editor-in-chief of the national news desk at InjuryBoard.com.[3]

Fox appealed and prevailed February 14, 2003 when an appeals court issued a ruling reversing the jury, accepting a defense argument that had been rejected by three other judges on at least six separate occasions…

The whistle-blowing journalists, twice refused Fox offers of big-money deals to keep quiet about what they knew, filed their landmark lawsuit April 2, 1998 and survived three Fox efforts to have their case summarily dismissed.  It is the first time journalists have used a whistleblower law to seek a legal remedy for being fired by for refusing to distort the news.   Steve and Jane are now considering an appeal to the Florida state Supreme Court.

The court did not dispute the heart of Akre’s claim, that Fox pressured her to broadcast a false story to protect the broadcaster from having to defend the truth in court, as well as suffer the ire of irate advertisers. Fox argued from the first, and failed on three separate occasions, in front of three different judges, to have the case tossed out on the grounds there is no hard, fast, and written rule against deliberate distortion of the news.

The attorneys for Fox, owned by media baron Rupert Murdoch, argued the First Amendment gives broadcasters the right to lie or deliberately distort news reports on the public airwaves.

In its six-page written decision, the Court of Appeals held that the Federal Communications Commission position against news distortion is only a “policy,” not a promulgated law, rule, or regulation. Fox aired a report after the ruling saying it was “totally vindicated” by the verdict.