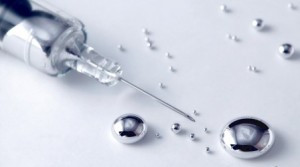 It is a common myth today that the vaccines administered to children no longer contain the toxic additive thimerosal, a mercury-based preservative linked to causing permanent neurological damage. But a recent federal case involving the U.S. Food and Drug Administration (FDA) has revealed that, contrary to this widely-held belief, thimerosal is actually still present in many batch vaccines, including in the annual influenza vaccine that is now administered to children as young as six months old.

Filed by a citizen-backed coalition advocating vaccine safety, the lawsuit against the FDA alleged that the agency’s continued endorsement and approval of thimerosal as a vaccine additive is a serious public health threat, especially since safer alternatives already exist and are widely used voluntarily by many vaccine manufacturers. But Judge Brett Kavanaugh, siding with antiquated pseudoscience, decided that thimerosal is not a health threat, and that those who wish to avoid it can simply choose thimerosal-free alternatives.

Ignoring the evidence of thimerosal’s dangers brought before him on behalf of the millions of children across the country who continue to be injected with this mercury-based additive, Judge Kavanaugh declared that the plaintiffs, which include groups like the Coalition for Mercury-Free Drugs (CMFD), did not have proper standing to file the lawsuit. And in the process, both he and the FDA inadvertently admitted that thimerosal is still present in many childhood vaccines, which counters popular claims to the contrary.

FDA admits on its website that thimerosal is still in vaccines

The fact that Judge Kavanaugh refused to hear the case is tragic in and of itself, as thimerosal, which is composed of 50 percent mercury, has been proven to cause serious health damage. But what may be even worse is the fact that many people falsely believe that thimerosal is not even included in vaccines anymore, which is leading them to blindly allow them to be administered to their children. And the U.S. Centers for Disease Control and Prevention (CDC) and the FDA have continued to provide dubious and misleading information on the subject, which the mainstream media has been complicit in spreading over the years.

But the FDA explains, in no uncertain terms, directly on its website that thimerosal is still added to certain vaccines. For this reason alone, it is crucial that parents who choose to vaccinate their children ask for an ingredients list for each and every vaccine before allowing them to be administered to their children.

“While the use of mercury-containing preservatives has declined in recent years with the development of new products formulated with alternative or no preservatives, thimerosal has been used in some immune globulin preparations, anti-venins, skin test antigens, and ophthalmic and nasal products, in addition to certain vaccines,” writes the FDA on its Thimerosal in Vaccines page (http://www.fda.gov).