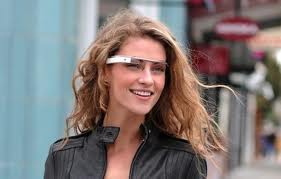 Augmented reality apps for the iPhone have been around for years, and continue to grow in popularity. The next phase of evolution is to merge smartphone capabilities into a wearable interface. Google has announced Project Glass, which is advancing toward a major release of augmented reality glasses in 2014, as seen in the video below:

The systems are in place, but as yet have been available only through external devices. All that has been needed to create an all-encompassing new reality is to integrate information into the everyday human experiential view. Microsoft is now jumping into the ring with its own developments, which at this point seems to be geared strictly toward entertainment venues and video games, but hints at a major shift toward investing in wearable computing, as well as entertainment systems that can observe those being entertained.

The actual principles behind first-person, human-computer interface systems have been around for many decades – it can be seen in combat zones around the world through the military Heads Up Display system (HUD). What began pre-WWII for fighter pilots, is now finding its way into the consumer market through video games, vehicles, and info-glasses. Contact lenses are also already in development by the Department of Defense through a system called iOptik – which is also projected to be available to consumers in 2014.

Google is clearly investing heavily in wearable computing; along with Project Glass, they also have patented “smart glove” technology which offers the following:

electronics including cameras on the fingertips, a compass, gyroscopes, accelerometers and other motion detectors embedded in the fingers. The palm section plays host to the CPU, RAM and local storage, and wireless communication chips are mounted on the backside.

…The cameras could be used to acquire a highly-magnified view of the world around them while the sensors would be the centerpiece to applications similar to what we use on smartphones like navigation. The wireless aspect could leech information from local open networks, satellites, or provide communication between a pair of Smart Gloves. (Source)

As with nearly all computer interface and intelligence-driven systems, the funding and implementation has its origins in the military-industrial complex, and are likely to have been in existence for at least decades before trickling down to the consumer level.

While info-glass makers Google and Microsoft both naturally tout the entertainment value, as well as the value of “capturing those special moments,” it would be naive not to also consider the ease with which people would begin to surveil and record one another. As this technology flourishes, full-time audio and video recordings will be stored, all in the blink of an eye.

With two intelligence agency-connected tech behemoths like Google and Microsoft investing so vigorously, a “smart” future appears to be on the way. And as government is now openly embracing a Minority Report-like future of pre-crime high-tech surveillance systems with their help, combined with a stated mission to intercept conversations and track Internet activity in real time, we should probably ask ourselves how much we really want to contribute to that endeavor by purchasing full-spectrum surveillance applications.

Additional sources for this article:
http://pressblue.com/google-project-glass-release-date-scheduled-for-2014/1171/andrea-weidlemeyer