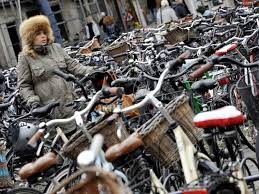 For a country which prides itself on having given the world the Mercedes and the Autobahn, it represents a major ideological U-turn: Hamburg, Germany’s second largest city, is planning to drastically to reduce the number of cars from its centre over the next 20 years and put thousands of commuters on bikes.

Under an audacious urban development scheme named “Green Network”, all vehicles will be verboten in significant swathes of the city by 2034. Instead people will move about the port city, either via  public transport or on foot or bicycle along a series of idyllic green thoroughfares which are now being painstakingly created.

“We envision a network that doesn’t just help residents to get from point A to B in a sustainable fashion,” Hamburg city spokeswoman Angelika Fritsch told the ZME Science urban planning network.

“It will offer people opportunities to hike, swim, do water sports, enjoy picnics, restaurants, experience calms and watch nature right in the city.”

A glance at the map of the Green Network project helps to explain what Hamburg’s environmental planners have in mind. On paper, the port city resembles a 3D depiction of a human organ. The conurbation is surrounded by green spaces which spawn scores green artery-like paths leading to the city centre.

The impression is reinforced by the mighty river Elbe and its tributaries which feed into the city centre and beyond and in many cases function as additional green waterways also leading to the centre of town. Some 30 city planners are currently working full time on plans for the network which will cover some 17,000 acres.

Hamburg’s planned Green Network will cover some 40 per cent of the city’s entire  area and will connect parks, recreational areas, playgrounds cemeteries and gardens with a comprehensive network of green paths. “Cities like London have a green belt, but the Green Network will be unique in covering an area from the outskirts to the city centre,” Ms Fritsch insists, “ In 15 to 20 years it will be possible to explore the city exclusively by bike or on foot,” she added.