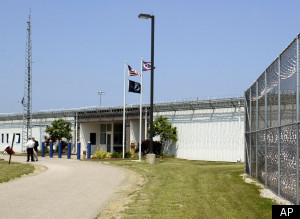 As state governments wrestle with massive budget shortfalls, a Wall Street giant is offering a solution: cash in exchange for state property. Prisons, to be exact.

Corrections Corporation of America, the nation’s largest operator of for-profit prisons, has sent letters recently to 48 states offering to buy up their prisons as a remedy for “challenging corrections budgets.” In exchange, the company is asking for a 20-year management contract, plus an assurance that the prison would remain at least 90 percent full, according to a copy of the letter obtained by The Huffington Post.

The move reflects a significant shift in strategy for the private prison industry, which until now has expanded by building prisons of its own or managing state-controlled prisons. It also represents an unprecedented bid for more control of state prison systems.

Corrections Corporation has been a swiftly growing business, with revenues expanding more than fivefold since the mid-1990s. The company capitalized on the expansion of state prison systems in the ’80s and ’90s at the height of the so-called ‘war on drugs,’ contracting with state governments to build or manage new prisons to house an influx of drug offenders. During the past 10 years, it has found new opportunity in the business of locking up undocumented immigrants, as the federal government has contracted with private companies in an aggressive immigrant-detention campaign.

And Corrections Corporation’s offer of $250 million toward purchasing existing state prisons is yet another avenue for potential growth. The company has billed the “corrections investment initiative” as a convenient option for states in need of fresh revenue streams: The state benefits from a one-time infusion of cash, while the prison corporation wins a new long-term contract. In addition, supporters of prison privatization have argued that states can achieve cost savings through outsourcing, as prison corporations give fewer benefits to employees.

“We believe this comes at a timely and helpful juncture and hope you will share our belief in the benefits of the purchase-and-manage model,” reads the letter from Harley Lappin, CCA’s chief corrections officer, who was a former director of the Federal Bureau of Prisons.

Ohio sold off one of its largest prisons to Corrections Corporation last year as a way to plug holes in its budget, and government officials estimate that outsourcing the prison could save the state $3 million annually. Louisiana Gov. Bobby Jindal (R) proposed putting three state prisons on the block last year to generate one-time revenue, but he failed to persuade state lawmakers to endorse the plan.

Others have raised serious doubts about the wisdom of selling off and privatizing state prisons, which could give private corporations substantially more bargaining power in long-term contracts with states. Prison management contracts can be canceled or re-bid frequently, with the state still retaining ownership of the prison as an asset. But if a private company owns the prison, the state would have fewer options if it wanted to cut ties. Any alternatives for housing prisoners would likely cost more, such as building a new prison from scratch or finding another company to take in its inmates.

A series of studies has also cast doubt on the private prison industry’s main selling point: efficiency. Research across numerous states has shown that the promised savings from private prisons can be illusory at best. Cost comparisons often fail to account for extra administrative expenses borne by the state, or differences in health care costs for sickly inmates who normally remain in state supervision.

What’s more, many civil liberties advocates question why a profit motive should be tied to incarceration policies, raising concerns that cutting costs could have an adverse effect on public safety. In 1998, six prisoners, including five convicted murderers, escaped from a Corrections Corporation prison in Youngstown, Ohio, putting the company in the national spotlight amid findings of inept supervision by guards and poor training by prison officials.

“It’s a real gamble for states to say, ‘Gee, we’re going to save a lot of money this way,'” said Zach Schiller, research director at Policy Matters Ohio, which did several studies analyzing Ohio’s sale of a state prison to Corrections Corporation of America. “The idea that we should do this because we need money on a one-time basis seems like awfully short-term thinking. If we want to talk about what our needs are for the budget, and what our needs are for housing prisoners, let’s look at those on a long-term basis and see what the best decisions are.”

A spokesman for Corrections Corporation of America, Steve Owen, said the company’s contracts with any government agency are completely transparent. He pointed out that in many states, including Ohio, governments require demonstrated cost savings of 5 percent or more to enter into a contract with a private operator.

“There has to be a cost savings, and they have to monitor that over time, so I think that speaks for itself,” Owen said. “At the end of the day, if we can’t provide the scope of services and the quality of services and do it at whatever the cost savings that are required, they’re not going to continue to do business with us.”

But estimated savings often come down to how those calculations are made, and outside researchers have questioned the numbers. In Arizona, for example, a 2010 report from the state’s auditor general showed that it cost the state more to house prisoners in private facilities than public prisons after factoring in administrative costs and adjusting for the types of medical care provided to less healthy inmates who tended to be housed in public facilities. And in Florida, where lawmakers this week could decide whether to privatize more than two dozen state prisons, reports about private prisons from the state’s legislative research office note, “cost savings estimates are subject to caveats and should be evaluated cautiously.”

In recent years, Corrections Corporation of America has made it clear that it sees opportunity in the new era of state budget crises. During earnings calls with investors, company executives have pointed out that the Great Recession has brought renewed interest in privatization.

“We continue to believe we are very well-positioned in a market that, despite the economic pressures faced by our customers, has provided healthy financial performance,” Corrections Corporation chief executive Damon Hininger said in the company earnings call last November. “Indeed, it is because of these pressures, which lead to severe capital constraints and the need to avoid increasing their pension liabilities, that we believe our value proposition to customers is getting stronger.”

The letter sent last month to 48 states was billed on the example of Ohio, which last year sold a prison near the shore of Lake Erie to Corrections Corporation for $72.7 million.

“We want to build on that success and provide our existing or prospective government partners with access to the same opportunity,” the letter said.

Those who follow the private corrections industry said the purchasing approach gives prison companies a new option for growth. Although U.S. prison populations have swelled to enormous proportions, growing more than sevenfold since the mid-1970s, growth has slowed and populations are expected to decline in many states.

“You’ve not seen inmate populations at the state level grow for the last two years,” said Kevin Campbell, a senior research analyst who follows the corrections industry at Avondale Partners, an investment firm. “So if you as an industry are going to continue to grow, then you have to think, ‘How do we take shares away from the public sector to the private sector?'”

The outright ownership of a prison generally makes state contracts more beneficial to a private operator such as Corrections Corporation of America, Campbell said. If a state owns a prison and contracts it out, the pricing tends to be more competitive, as numerous companies would be jockeying for the management job.

“That just keeps a lid on how profitable a management contract can be,” Campbell said. “That’s why their preference would be to own versus just straight-out manage a contract.”

Yet critics point to inherent problems in such long-term contracts, particularly provisions that require a prison to be 90 percent full throughout the life of an agreement. In Ohio, for example, contractors are guaranteed payment at the 90 percent rate “regardless of the actual number of inmates at the institution at that time.”

The mandate to keep prisons full raises questions about cost efficiency — what if there aren’t enough inmates? — but it also presents a moral question about maintaining a constant supply of new prisoners.

“It becomes a self-fulfilling prophecy,” said Shakyra Diaz, policy director of the American Civil Liberties Union of Ohio. “In order to have it at 90 percent, you need to be able to make criminals to fill it at 90 percent.”

Corrections Corporation’s filings with the Securities and Exchange Commission clearly point out that business success is tied to a status quo in criminal justice policy.

“The demand for our facilities and services could be adversely affected by the relaxation of enforcement efforts, leniency in conviction or parole standards and sentencing practices or through the decriminalization of certain activities that are currently proscribed by our criminal laws,” the company’s most recent annual filing noted. “For instance, any changes with respect to drugs and controlled substances or illegal immigration could affect the number of persons arrested, convicted, and sentenced, thereby potentially reducing demand for correctional facilities to house them.”

Jailing Americans for Profit: The Rise of the Prison Industrial Complex