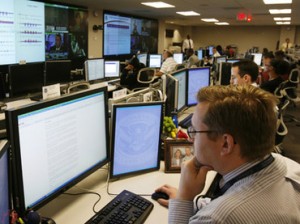 The US Department of Homeland Security has signed a multi-million dollar contract with a global management consulting firm to boost the country’s attempt to master biosurveillance using social networks.

Virginia-based Accenture Federal Services will receive $3 million in federal funds to spend during the next year as they assist with efforts from the DHS and the Office of Health Affairs (OHA) to improve the United States’ ability to track health trends and potential pandemics by means of monitoring social media accounts and other online activity.

According to a statement from the company, Accenture will be working hand-in-hand with the OHA in order to test out a pilot program that hopes to manage, link and analyze crucial data submitted by individuals about diseases and perhaps even a biological attack by pulling feeds from social networks.

“Biosurveillance is the monitoring of public health trends and unusual occurrences, relying on pre-existing, real-time health data – data that is publicly available and easily obtained,” says Joanne Veto, Accenture’s director of media and analyst relations. “Because of the vast amount of data and information available and readily shared through social media (Facebook, Twitter, blogs) and the rapid pace information is shared, collecting and understanding information from these channels is critical.”

It’s no secret that the government has used social media to analyze domestic trends earlier, but this could be the first time that the DHS is determined to try and keep track of science, monitoring user-inputted data to map out and make sense of certain statistics.

Earlier this year, an independent team of researchers from the University of Rochester in Western New York State analyzed millions of GPS-tagged tweets from over 600,000 residents of the Big Apple to see how disease traffic could be captured and comprehended using algorithms.

“Given that three of your friends have flu-like symptoms, and that you have recently met eight people, possibly strangers, who complained about having runny noses and headaches, what is the probability that you will soon become ill as well,” Adam Sadilek of the school said in his research. “Our models enable you to see the spread of infectious diseases, such as flu, throughout a real-life population observed through online social media.”

At roughly the same time that Sadilek’s team went public with their findings, President Obama issued a national strategy for biosurveillance in hopes that federal agencies will be able to take control of similar projects.

“Consider social media as a force multiplier that can empower individuals and communities to provide early warning and global situational awareness,” the guidelines stated.

In a statement from Pres. Obama at the time, the commander-in-chief said he was giving federal agencies 120 days to lay out the specifics of a biosurveillance program tasked with“obtaining timely and accurate insight on current and emerging risks.”

On a page on the Accenture website, the company acknowledges their several already established-ties with the DHS, with who they’ve worked with on previous projects in the past.

“Nothing is more important than securing the nation — the fundamental mission of the Department of Homeland Security (DHS). Accenture works with DHS, both in its external mission to protect the people of the United States from terrorist threats and in its internal quest to improve operations,” the company writes.

By rolling out a pilot program that analyses tweets and blog posts, Accenture’s Matchette says their latest project only makes sense to keep on task with making America safe from any outbreaks.

“Social media platforms are now an everyday part of peoples’ lives, finding their way into all forms of communication. Rapidly collecting and understanding what information is being shared will help OHA meet its mission to detect and respond to potential threats to national health security,” Matchette says in a statement.

In 2004, the DHS gave Accenture a contract valued at up to $10 billion to develop technology to track foreign visitors to the United States. Last year, the Electronic Privacy Information Center (EPIC) filed a federal suit against the DHS for failing to fully explain their role in monitoring social networks for the sake of supposed counter terrorism.