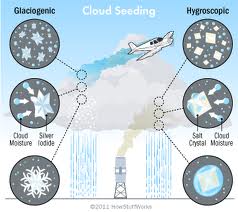 The persistent drought that has gripped California for the past year has meant that few storms are crossing through the state. So when they do, state water managers want to extract every bit of water they can — and then some, which is why they’re increasingly turning to seeding the clouds for rain.

Cloud seeding began as an experimental practice in the late 1940s that eventually became a yearly occurrence for water agencies and hydroelectric utilities. Over the winter period, there are approximately 12 cloud seeding projects across California that operate across 15 watersheds from Lake Almanor to the San Gabriel River.

The process involves releasing a silver iodide vapor, sometimes supplemented with dry ice, into a cloud system to increase snowfall or rainfall. The silver iodide works by inducing nucleation — meaning the water in the air condenses and crystallizes to form ice particles.  The silver iodide is dispersed by aircraft or from dispersion devices located on the ground.

In cold air temperatures, such as in the Sierra Nevada mountain range, where much of California’s cloud seeding takes place, the particles will increase the amount of snowfall, thereby increasing the amount of water that reaches the state’s water-storage reservoirs. The Sacramento Municipal Utility District also seeds clouds over its hydroelectric reservoirs to produce more water to generate electricity.