Skip to content
HomeMilitaryOrwellian World of Reality versus Propaganda 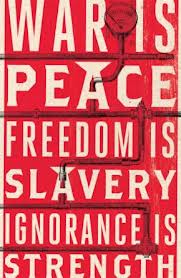 In George Orwell’s novel 1984,  the country of Oceania has been in a war against Eurasia for years.

The government uses propaganda to convince people that, “We’ve always been at war with Eastasia”.  The dumbed-down public doesn’t even notice that they’ve switches sides, and blindly rallies around Eurasia as its perennial friend and ally.

The same thing is happening in real life with Al Qaeda.

Western governments and mainstream media have admitted that Al Qaeda is fighting against the secular Syrian government, and that the West is supporting the Syrian opposition … which is helping Al Qaeda.

Similarly, the opposition which overthrew Libya’s Gadaffi was mainly Al Qaeda … and they now appear to be in control of Libya (and are instrumental in fighting in Syria.)

Of course, Al Qaeda was blamed for 9/11, and the entire decades-long “War on Terror” was premised on rooting out Al Qaeda and related groups.

So the fact that we now consider Al Qaeda fighters to be allies in any way, shape or form is positively Orwellian.

Remember, as Jimmy Carter’s National Security Adviser admitted on CNN, we organized and supported Bin Laden and the other originators of “Al Qaeda” in the 1970s to fight the Soviets.  (he also told the Senate in 2007 that the war on terror is “a mythical historical narrative”. )

But obviously we lost control and they turned against us … and then it took us years to hunt down and kill Bin Laden. Right?

The shenanigans started even before 9/11:

We’ve always been at war with Eastasia …