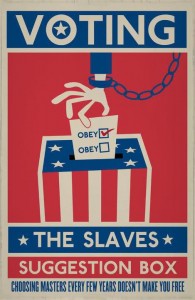 Who Really Elects The President Of The United States? Not You.

Hilariously, our consent to this 15th Amendment and to voter registration means that 100 million “public voters” all cast their votes solely in the District of Columbia, not in the state they live – which in the electoral college, D.C. only represents 3 electoral votes out of 538.

“The Senate of the United States shall be composed of two Senators from each State, elected by the people thereof, for six years; and each Senator shall have one vote. The electors in each State shall have the qualifications requisite for electors of the most numerous branch of the State legislatures.”

The Electoral College consists of these electors, who formally elect the President and Vice President of the United States (this is not the original united states of America, but the United States corporation). Since 1964, there have been 538 electors in each presidential election, as held in Article 2, Section 1, Clause 2 of the Constitution.

The Electoral College is an indirect election. This means that all registered Untied States “citizens” do not elect their president! Instead, the people elect congressmen, who along with their chosen political party, delegate the power of “elector” to others and thus the president (Chief Executive Officer ) is elected through the electoral college. This is how all major corporations work – the board of directors (congress) elect the CEO (president) of the corporation (United States).

So what happens to the millions upon millions of registered votes from the citizens (registered U.S. “persons”) of the United States?

It’s simple, really… The peoples votes are at best counted and the results may be similar to the 3 electoral college votes of the District of Columbia that are made by the electors (as public opinion) – the corporation that all voters are contractually “registered” to vote in and claim consensual residence in!

Through the electoral college, the constitutional “electors” of each state then vote for who the president and vice president of the corporation will be, each state having a different number of electoral votes based on population.

And the electoral college overrules the popular vote!!!

In other words, for all of the hoopla, pomp and circumstance, and billions and billions of dollars that surround the public vote for the presidential elections every four years, the whole thing is completely for show to fool the people into thinking they are electing the president! Because the popular (persons) vote doesn’t really count for anything…

In the case of legal persons, this could not be a more true statement. Men perish and virtually cease to exist because of their lack of knowledge of legalese and because of their own contractual corporate person-hood.

The voters of each state and the District of Columbia, through the political party system, vote for electors to be their authorized constitutional participants (electors) in a presidential election without most voters even knowing this is happening. Electors are free to vote for anyone eligible to be President, but in practice pledge to vote for specific candidates according to their political party, and political parties (not the people) cast ballots for favored presidential and vice presidential candidates by voting for correspondingly pledged electors within the party. Keep in mind that the Democratic and Republican parties, just like the BAR, are 100% private associations that do not represent the people in any way, though that is not what their media ads tell the people (voters) who support them.

What is the legal definition of “elector” from Bouvier’s law dictionary, 1856?

ELECTOR – government. One who has the right to make choice of public officers one, who has a right to vote. – 2. The qualifications of electors are generally the same as those required in the person to be elected; to this, however, there is one exception; a naturalized citizen may be an elector of president of the United States, although he could not constitutionally be elected to that office.

Who In The Hell Are The Actual “Electors” Of The President Of This United States?

This privilege of the electoral college election of the president of the United States is delegated each year by your congressmen (538 house and senate members of each state, who each have one vote per the constitution) and by the political parties themselves – delegated to other citizens of their perspective states called “electors”.

The Twelfth Amendment provides for each “elector” to cast one vote for President and one separate vote for Vice President. It also specifies how a President and Vice President are elected. In practice the pres and vice-pres are always of the same party. But in reality, they are elected separately, and so the United States could technically have a mixed party ticket. But the public would get really confused at this, and so the electors will never vote in that way so as to retain the quite open secret of their elite college.

The President of the Senate shall, in the presence of the Senate and House of Representatives, open all the certificates and the votes shall then be counted.

The person having the greatest Number of votes for President, shall be the President, if such number be a majority of the whole number of Electors appointed; and if no person have such majority, then from the persons having the highest numbers not exceeding three on the list of those voted for as President, the House of Representatives shall choose immediately, by ballot, the President…

To get the full skinny from the Congressional Research Center, read this: http://fpc.state.gov/documents/organization/36762.pdf

Nowhere here does it mention you, me, or any of the approximately 100 million “registered” voters in the United States. In short, the people do not in any way elect their president – though apparently most have been led to believe they do judging by the media circus that happens every four years costing billions of taxpayer and private campaign dollars. The presidency is really won by which ever political party lobbies the “electors” best, and by which party those electors represent and are members of. This is why someone like me will never be the president of the United States – unless, perhaps, the people actually wake up from their collective dream-state and finally realize that they do not have a choice, and finally revolt against the system that fools and re-enslaves them every four years. Silly persons…

Even more disturbing is to actually see a list of who these “electors” are:

Since the very first president, people have been expecting their whole life to turn around with a single vote. It never has. Fluctuations in quality of life will always remain and the majority will never be happy.

However, after over 100 years and countless presidents, you feed into the propaganda that “he will change it all!”.. And in the end, he never does…HERE are the facts…

– Your vote does not count.

– Voting is submission to Tyranny.

– Voting is an act of tolerance, not an act of support. (few will understand this)

– When you vote, you not only cast a paper ballot; you confirm that you approve of the system and those who run it – corruption and all.

– Voting is old school, outdated and defunct. It’s only existent for traditional purposes, because regardless of who wins, the show never, EVER changes.

– Voting is a written, personal contribution to murder, thievery, bribery, war, and everything the government does wrong. If your vote counts for anything, it is for ignorance due to this simple fact.

– Voting has NEVER changed anything major for the better. All of the “could have(s), would have(s), and will(s) are purely hypothetical bullshit that mean nothing.

– Your vote provides consent. That consent is what fuels our slavery to the government, allows them to be in control and tells them “hey, I’m fucking stupid and I haven’t figured out that this is all a big scam, yet.”

– Your vote alone, all by itself, show’s massive amounts of ignorance. The most intelligent thinkers of all time WERE NOT VOTERS, because they knew and understood the hypocrisy involved with voting. They refused to provide their consent to war, murder, high crime and economic rape. Only those who understand the way the system works – for real – will understand this.

– Once elected, that president RARELY EVER makes any of the changes he swore to make. It’s always the opposite, filled with bullshit excuses and sugar-coated with public aid.

– The fact that you had no say in choosing the candidates themselves.

– You’re likely voting on one to two major factors, which will most likely receive NO attention. So, all in all, you’re voting based on a politician’s opinion.