Prison vs School: The Tour 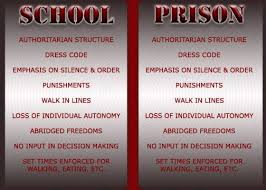 The War on Kids’ shows how American public schools have failed in their mission to provide education, erode the country’s democratic foundation by denying the most basic civil rights to youth, and often resemble prisons.

Amazing how we model our schools after prisons but yet the prisons are in better shape. I know a few schools that lock their libraries. I don’t understand why anyone would think that’s a good idea. In areas where there isn’t anything for kids to turn to but crime, you lock up the one place that could be a safe haven and a life changer. We say to educate but really we are just sweeping the issue under the rug.