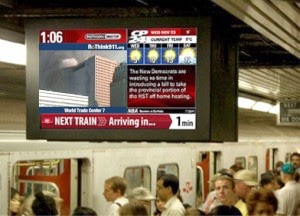 Today, March 18th, the ReThink911 group launched a new ad campaign that is showcased within the Toronto subway system (TTC.)

This campaign will be running for 2 weeks and approximately 1.2 million residents of Toronto will see video footage of the collapse of World Trade Center 7 compared to a controlled demolition with the caption “ReThink911.org.”

It is estimated that people who ride the subway on a daily basis will see the ad an average of 5 times during the two-week campaign period.

When the people were asked who they were more inclined to believe – the U.S. government which still states that the building was brought down by fires, or the critics such as Architects and Engineers For 9/11 Truth who argue that it was a controlled demolition, 49% agree with the critics, while only 20% believe the official story from the government. 44% are in support of reopening the investigation while only 14% are opposed.