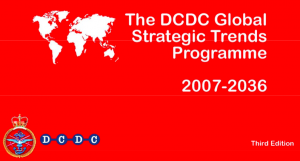 Strategic Trends is an independent view of the future produced by the Development Concepts and Doctrine Centre (DCDC), a Directorate General within the UK’s Ministry of Defence (MOD). It is a source document for the development of UK Defence Policy.

This edition of Strategic Trends is benchmarked at December 2006. It is a live document and will be updated regularly on our website as new thinking emerges and trends develop.

The findings contained in this edition of Strategic Trends do not represent an official position of Her Majesty’s Government or the UK MOD. The information is, however, Crown Copyright.

During the next 30 years, every aspect of human life will change at an unprecedented rate, throwing up new features, challenges and opportunities. Three areas of change, or Ring Road issues, will touch the lives of everyone on the planet and will underpin these processes: climate change, globalization and global inequality

There is compelling evidence to indicate that climate change is occurring and that the atmosphere will continue to warm at an unprecedented rate throughout the 21st Century. A scientific consensus holds that a large part of this warming is attributable to human activities, primarily through the concentration of CO2 and other greenhouse gases. Change will be intensified and accelerated by the diminution of natural carbon-capture processes (such as forests and marine life) and the reduction of the polar ice-caps. Uncertainty remains as to the precise rate and character of expected changes over the next century. Climate science is complex, with linear cause and effect relationships not yet readily apparent; therefore, the consequences of climate change will vary in their impact in time, incidence and geographical extent. It may be a very unstable and unpredictable process, involving both progressive evolution and sudden instabilities.

Resource Competition. Economic growth and increased consumption will result in greater demand and competition for essential resources. Demand for energy is likely to grow by more than half again by 2035 and fossil fuels will have to meet more than 80% of this increase.5 Major reserves are in politically unstable regions and primary consumer nations are likely to be increasingly reluctant to trust security of supply to market forces and the integrity of the international system.

Over the next 30 years, the resource-related challenges to global stability will be diverse, wide-ranging and significant. Climate change and a shifting environment; increasing demand for natural resources, particularly food, water and fossil fuels; a growing and rapidly globalizing economy; urbanization and the emergence of new health challenges will all have major impacts and unpredictable effects. While the global economy is likely to grow during the period, improving material conditions for many people, the combined, uneven effect of these impacts will be to increase uncertainty for many, creating new sources of insecurity, instability and tension.

(p. 25) Economic growth, combined with the continuing rise in the global population, will intensify the demand for natural resources, minerals and energy. Oil is likely to remain the principal source of motive power, particularly for vehicles, and growing competition for this diminishing resource will lead to a significant rise in energy prices. It is possible that this will cause a slow down in economic growth from 2020, although this may be offset by new sources of energy: coal derivatives, hydrogen fuel cells, bio-ethanol and for power generation, nuclear fusion.

The future effects of climate change will stem from a more unstable process, involving sudden, and possibly in some cases catastrophic changes. It is possible that the effects will be felt more rapidly and widely than anticipated, leading, for example, to an unexpected increase in extreme weather events, challenging the collective and individual capacity to respond.

Overheating of energy markets may lead more countries to follow the example of China in establishing bilateral arrangements that seek to dominate or control the global market in their favour, possibly fuelling tension among those who are excluded or who cannot or will not compete in a market environment. This may lead to political and even military interventions in order to protect access and safeguard supply. Instability in a supplier region will also cause market fragility, including global price spikes, which in the most severe cases may trigger wider political instability, especially in economically vulnerable regions. Any major constraints on, or threats to, the free market in energy could arrest or limit the globalization dynamic.

Increasing demand and climate change are likely to place pressure on the supply of key staples, for example, a drastic depletion of fish stocks or a significantly reduced capacity to grow rice in SE Asia or wheat on the US plains.

The Golden Age of cheap energy has passed. Competition for energy supplies will dominate the economic landscape during the next 30 years and world energy demand growth is likely to rise annually by between 1.5 and 3.1%. Sustained high demand from fast-developing economies such as China and India will increase significantly, while established consumers are likely to seek to maintain levels of consumption consistent with sustaining their own growth. This trend is likely to result in highly competitive pricing and the continued enrichment and economic progress of producer countries, including Russia and Iran. This in turn will lead to enhanced possibilities for international influence and leverage by producers and they are likely to allow favoured or politically useful countries to make preferential deals. In response, governments are increasingly likely to follow China’s example and seek ways to bypass the uncertainties and volatilities of the global energy market, by establishing bilateral arrangements with individual suppliers, particularly in Africa, South America and other developing countries with unstable regimes. This tendency is likely to be strongest among fast-developing economies whose economic growth will depend on increasing manufacturing output and social amelioration, but which cannot compete on price within a global market. The prospect, apparent or real, of the peak production of oil during the timeframe out to 2035 and progressive diminution of output thereafter will intensify competition for remaining resources.

Disputes may arise for a number of reasons. Requirements to access sources of supply in unstable regions or countries could lead to intervention to protect assets and investment, while attempts to exploit new sources in the deep oceans and the polar regions could lead to confrontation over sovereignty and the terms of existing international agreements. Fragmentation or unbalanced operation of energy markets may fuel increased instability in producer regions; countries and communities are likely to respond by energy-saving measures, exploiting additional or alternative sources of energy and reducing their dependence on oil. This will occur through greater investment in sources such as nuclear and renewable energy, and the development of new technologies, particularly those related to fusion, hydrogen fuel cells and bio-fuels (although this will have an environmental impact and reduce the amount of land available for food production).

As oil supplies diminish and economic growth continues, recourse may be made to plentiful reserves of coal which could be: burned in power stations to generate electricity, transformed to gaseous fuels or liquefied to feed internal combustion engines. China will be able to exploit strategically significant coal reserves in this way. This trend will incur additional production and environmental burdens, although current and emerging technologies will assist in dealing with pollutants at a cost.

… In response to globalization and the pressures of a more uncertain world, networks based on family, clan or tribe structures and extended kinship groups, in common with a more communitarian approach, are likely to proliferate, especially in areas of declining or low prosperity and opportunity.

The US is likely to sustain its international leadership until at least 2020, after which a more multipolar world will challenge its hegemonic status, with China, Russia, India, Brazil and Indonesia and a host of alternative, possibly rival polities weakening its grip on certain regions and the international system. US strategic power will also be progressively diluted by its integration within an increasingly globalized economy and the need to address large budgetary imbalances and deficits.

New Energy Technology – New sources of power generation are likely to become commercially available and viable during the period. However, advances may be evolutionary rather than revolutionary during the first half of the period owing to the legacy of, and sunk investment in, current methods of oil-based energy conversion, remaining, accessible oil stocks and the likely viability of manufacturing oil, particularly from shale and coal. This evolutionary approach may continue to expose the global market to price fluctuations and risk based on hydrocarbon dependency. Towards the end of the period, major advances are anticipated in other sources, possibly including nuclear fusion. There is likely to be a strong market for smaller, more efficient autonomous power supplies throughout the period, which is likely to lead to accelerated research in ethanol, methanol, hydrogen and radical fuel cell options. Renewable energy sources will also find niche markets as indicated by the success of bio-fuels in Brazil, but these are only expected to make up 8% of global energy supply by 2020.44

An analysis of trends and probable outcomes can only go so far in describing the future, the unexpected also needs to be taken into account – shocks will happen. Our discussion now outlines ways in which discontinuities may occur. This section makes no claim to be a comprehensive list of all possible shocks, but does seek to demonstrate how the world might develop in ways that are radically and intuitively different from outcomes derived from linear analysis.

Revolution in the Supply of Energy Investment

in alternative sources of energy, particularly hydrogen power, offers the possibility of an affordable, miniaturized, autonomous power source, especially as advanced fuel cells could enable power to be stored for transport systems and other remote platforms. A sudden and early breakthrough would reduce global dependence on increasingly scarce fossil fuels and the unstable regions from which they are obtained, significantly altering the geopolitical context of the early 21st century. Similar shocks might arise from early breakthroughs in nuclear fusion and the exploitation of methanol and ethanol.

The middle classes could become a revolutionary class, taking the role envisaged for the proletariat by Marx. The globalization of labour markets and reducing levels of national welfare provision and employment could reduce peoples’ attachment to particular states.

The growing gap between themselves and a small number of highly visible super-rich individuals might fuel disillusion with meritocracy, while the growing urban under-classes are likely to pose an increasing threat to social order and stability, as the burden of acquired debt and the failure of pension provision begins to bite.

Faced by these twin challenges, the world’s middle-classes might unite, using access to knowledge, resources and skills to shape transnational processes in their own class interest.

The same forces could push the middle classes towards far-right, nationalistic movements (fascism).