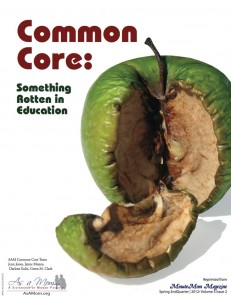 It’s interesting to hear a student opinion on Common Core as he views it in relation to teacher effectiveness. He’s an amazing speaker, and well worth spending 5 minutes to listen to. A couple of my favorite quotes in here include –

“If everything I learned in [high] school was a measurable objective, I haven’t learned anything.”

“Creativity, appreciation, inquisitiveness. These are impossible to scale, but they are the purpose of education. Why our teachers teach, why I choose to learn.”

” I’ve already been told by legislators and administrators, Ethan, it’s just the way things work; but why? I’m going to answer that question, it’s bureaucratic convenience. It works with nuclear reactors, it works with business models, why can’t it work with students?

154 responses to “TN Student Speaks Out About Common Core”