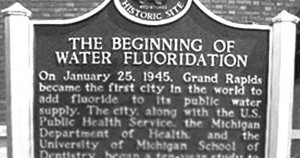 The year before water fluoridation began in the United States, the entire dental profession recognized that fluoride was detrimental to dental health. In fact, in 1944 the Journal of the American Dental Association reported that using between 1.6 and 4 ppm (parts per million) fluoride in water would cause 50% of adults to need false teeth. On top of that, the world’s largest study looked at 400,000 students, revealing that tooth decay increased in over 25% with just 1ppm fluoride in drinking water. (http://www.healthy-communications.com)

Yet still, in 1945, fluoride was put into municipal water systems in Newburgh, New York, and Grand Rapids, Michigan. Over the next 50 years, more than 60 percent of the U.S. population was “fluoridated” at a minimum of 1 ppm. Currently, over 75% of the United States water supply contains this deadly toxin.

One part of the hoax, “fluoride helps with tooth formation,” was removed from the “American Fluoride Campaign” early on. Realizing this might expose the entire campaign as fraudulent, the FDA and CDC simply removed that language, but kept the masses believing that fluoride keeps dental cavities at bay.

Over 70% of America still clings to the multi-faceted myth

Research proves that fluoride is an extremely neurotoxic chemical which interrupts basic functions of nerve cells in the brain and can lead to Alzheimer’s, atherosclerosis (hardening of the arteries), infertility, birth defects, diabetes, cancer and lowered IQ. The aluminum “tricks” the blood-brain barrier and allows chemical access to brain tissue.

Think fluoride is used by the rest of the world? France, Germany, Japan, Sweden, Denmark, Holland, Finland, India and Great Britain have all rejected its use after special commissions and health secretaries reviewed the negative evidence.

Think fluoride cleanses the water? Fluoride is one of the basic ingredients in military nerve gas. Sodium fluoride is a hazardous waste by-product from the manufacture of aluminum and fertilizer, and it is a common ingredient in roach and rat poisons.

Think fluoride fights cavities and strengthens bones? Dental fluorosis is often caused by over-exposure to fluoride when the dental enamel is mineralizing during childhood. Fluoride is unique in its ability among acids to penetrate tissue, causing soft tissue damage and bone erosion as it leaches calcium and magnesium from the body. (http://tuberose.com/Fluoride.html)

Think fluoride evaporates from water? Fluoride does not evaporate from water left sitting out. Also,boiling or freezing won’t help at all, and basic filters like Brita do not remove it. Reverse osmosis does remove it, and natural spring water does not contain it.

Because the ADA maintains a stranglehold on the dental profession, no dentists are ever openly critical of fluoride. The ADA can influence State Dental Boards which can take away a dentist’s license, so you won’t hear anything negative about it from your dentist. Most brands of toothpaste contain at least 1,000 ppm fluoride, so if a child were to eat an entire tube, he/she would die.

Fluoride has never received FDA approval and does not meet “requirements of safety and effectiveness.” The FDA states that fluoride is a prescription drug. Because this “drug” is put in municipal water, there is absolutely no control over individual dosage.

So, why on earth would the USA’s regulatory agencies allow such a nightmare to perpetuate? In the early 1900’s, when important vitamins (like B12) were discovered and natural remedies became popular, medicine was basically unprofitable. Fluoridation was a planned experiment of mass medication to induce diseases that would later be “treated” with expensive healthcare, and that is why government paid healthcare in America is nothing but a pipe dream.

Sources for this article include: