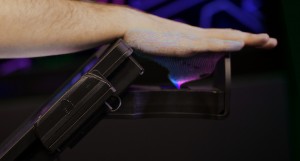 Identity theft, fraudulent payments, and accidental misuse of funds are all realities in our fast paced economy.

In recent years however, technology has played a huge role in securing financial assets. PINs and security codes have been the status quo for basic financial security, but two friends in New Jersey are taking that concept a step further by using vein scans  to confirm a person’s identity to secure financial transactions.

It’s called Pulse Wallet and it is a point-of-sale register and biometric payment terminal. PulseWallet lets customers link their credit cards and other payment methods to their palms so they can leave their wallets at home.

The co-founders are Matt Saricicek and Aimann Rasheed.

They say there are benefits to this new technology in all sorts of marketplaces.

“We were thinking about a convenient way to make a payment like using yourself, because you’re more unique than anything out there, said Saricicek.

“Its part of you and you can’t lose it and you don’t even know what it is. It’s a password that you don’t know you have as soon as you place it your good to go, so it’s something no one can steal, said Rasheed.

Pulse Wallet says it airlines want to use it as a new type of boarding pass.

Select retailers in New Jersey are in a beta program for the next three to six months.  Mass production of the devices is set to roll out in the spring.

The technology actually scans palm vein patterns underneath the skin. The company claims it is more secure than fingerprints because there are no traces for someone to replicate and the scanning requires blood flow for a proper read.

The company actually addresses the issue of the security involving a severed hand. The company states in its frequently asked questions: “Firstly we hope that this will never happen. However, even if someone, somehow, got away with sneaking a chopped off hand into any store, they wouldn’t be able to use it at check-out due to a lack of blood flow in the severed hand. “Pulse Wallet says it can also function like a normal credit swiping system if users or merchants choose to opt-out on registering a their biometric profile.