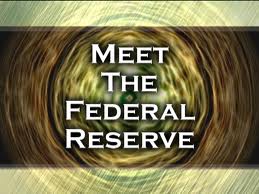 “Some people think that the Federal Reserve Banks are United States Government institutions. They are private monopolies which prey upon the people of these United States for the benefit of themselves and their foreign customers; foreign and domestic speculators and swindlers; and rich and predatory money lenders.”

– The Honorable Louis McFadden, Chairman of the House Banking and Currency Committee in the 1930s

The Federal Reserve (or Fed) has assumed sweeping new powers in the last year. In an unprecedented move in March 2008, the New York Fed advanced the funds for JPMorgan Chase Bank to buy investment bank Bear Stearns for pennies on the dollar. The deal was particularly controversial because Jamie Dimon, CEO of JPMorgan, sits on the board of the New York Fed and participated in the secret weekend negotiations.1 In September 2008, the Federal Reserve did something even more unprecedented, when it bought the world’s largest insurance company.

The Fed announced on September 16 that it was giving an $85 billion loan to American International Group (AIG) for a nearly 80% stake in the mega-insurer. The Associated Press called it a “government takeover,” but this was no ordinary nationalization. Unlike the U.S. Treasury, which took over Fannie Mae and Freddie Mac the week before, the Fed is not a government-owned agency. Also unprecedented was the way the deal was funded. The Associated Press reported:

“The Treasury Department, for the first time in its history, said it would begin selling bonds for the Federal Reserve in an effort to help the central bank deal with its unprecedented borrowing needs.”2

This is extraordinary. Why is the Treasury issuing U.S. government bonds (or debt) to fund the Fed, which is itself supposedly “the lender of last resort” created to fund the banks and the federal government? Yahoo Finance reported on September 17:

“The Treasury is setting up a temporary financing program at the Fed’s request. The program will auction Treasury bills to raise cash for the Fed’s use. The initiative aims to help the Fed manage its balance sheet following its efforts to enhance its liquidity facilities over the previous few quarters.”

Normally, the Fed swaps green pieces of paper called Federal Reserve Notes for pink pieces of paper called U.S. bonds (the federal government’s I.O.U.s), in order to provide Congress with the dollars it cannot raise through taxes. Now, it seems, the government is issuing bonds, not for its own use, but for the use of the Fed! Perhaps the plan is to swap them with the banks’ dodgy derivatives collateral directly, without actually putting them up for sale to outside buyers. According to Wikipedia (which translates Fedspeak into somewhat clearer terms than the Fed’s own website):

“The Term Securities Lending Facility is a 28-day facility that will offer Treasury general collateral to the Federal Reserve Bank of New York’s primary dealers in exchange for other program-eligible collateral. It is intended to promote liquidity in the financing markets for Treasury and other collateral and thus to foster the functioning of financial markets more generally. . . . The resource allows dealers to switch debt that is less liquid for U.S. government securities that are easily tradable.”

“To switch debt that is less liquid for U.S. government securities that are easily tradable” means that the government gets the banks’ toxic derivative debt, and the banks get the government’s triple-A securities. Unlike the risky derivative debt, federal securities are considered “risk-free” for purposes of determining capital requirements, allowing the banks to improve their capital position so they can make new loans. (See E. Brown, “Bailout Bedlam,” webofdebt.com/articles, October 2, 2008.)

In its latest power play, on October 3, 2008, the Fed acquired the ability to pay interest to its member banks on the reserves the banks maintain at the Fed. Reuters reported on October 3:

“The U.S. Federal Reserve gained a key tactical tool from the $700 billion financial rescue package signed into law on Friday that will help it channel funds into parched credit markets. Tucked into the 451-page bill is a provision that lets the Fed pay interest on the reserves banks are required to hold at the central bank.”3

If the Fed’s money comes ultimately from the taxpayers, that means we the taxpayers are paying interest to the banks on the banks’ own reserves – reserves maintained for their own private profit. These increasingly controversial encroachments on the public purse warrant a closer look at the central banking scheme itself. Who owns the Federal Reserve, who actually controls it, where does it get its money, and whose interests is it serving?

Not Private and Not for Profit?

The Fed’s website insists that it is not a private corporation, is not operated for profit, and is not funded by Congress. But is that true? The Federal Reserve was set up in 1913 as a “lender of last resort” to backstop bank runs, following a particularly bad bank panic in 1907. The Fed’s mandate was then and continues to be to keep the private banking system intact; and that means keeping intact the system’s most valuable asset, a monopoly on creating the national money supply.

Except for coins, every dollar in circulation is now created privately as a debt to the Federal Reserve or the banking system it heads.4 The Fed’s website attempts to gloss over its role as chief defender and protector of this private banking club, but let’s take a closer look. The website states:

* “The twelve regional Federal Reserve Banks, which were established by Congress as the operating arms of the nation’s central banking system, are organized much like private corporations – possibly leading to some confusion about “ownership.” For example, the Reserve Banks issue shares of stock to member banks. However, owning Reserve Bank stock is quite different from owning stock in a private company.

The Reserve Banks are not operated for profit, and ownership of a certain amount of stock is, by law, a condition of membership in the System. The stock may not be sold, traded, or pledged as security for a loan; dividends are, by law, 6 percent per year.”

* “[The Federal Reserve] is considered an independent central bank because its decisions do not have to be ratified by the President or anyone else in the executive or legislative branch of government, it does not receive funding appropriated by Congress, and the terms of the members of the Board of Governors span multiple presidential and congressional terms.”

* “The Federal Reserve’s income is derived primarily from the interest on U.S. government securities that it has acquired through open market operations. . . . After paying its expenses, the Federal Reserve turns the rest of its earnings over to the U.S. Treasury.”5

1. The Fed is privately owned.

2. The fact that the Fed does not get “appropriations” from Congress basically means that it gets its money from Congress without congressional approval, by engaging in “open market operations.”

Here is how it works: When the government is short of funds, the Treasury issues bonds and delivers them to bond dealers, which auction them off. When the Fed wants to “expand the money supply” (create money), it steps in and buys bonds from these dealers with newly-issued dollars acquired by the Fed for the cost of writing them into an account on a computer screen. These maneuvers are called “open market operations” because the Fed buys the bonds on the “open market” from the bond dealers. The bonds then become the “reserves” that the banking establishment uses to back its loans. In another bit of sleight of hand known as “fractional reserve” lending, the same reserves are lent many times over, further expanding the money supply, generating interest for the banks with each loan. It was this money-creating process that prompted Wright Patman, Chairman of the House Banking and Currency Committee in the 1960s, to call the Federal Reserve “a total money-making machine.” He wrote:

“When the Federal Reserve writes a check for a government bond it does exactly what any bank does, it creates money, it created money purely and simply by writing a check.”

3. The Fed generates profits for its shareholders.

The interest on bonds acquired with its newly-issued Federal Reserve Notes pays the Fed’s operating expenses plus a guaranteed 6% return to its banker shareholders. A mere 6% a year may not be considered a profit in the world of Wall Street high finance, but most businesses that manage to cover all their expenses and give their shareholders a guaranteed 6% return are considered “for profit” corporations.

In addition to this guaranteed 6%, the banks will now be getting interest from the taxpayers on their “reserves.” The basic reserve requirement set by the Federal Reserve is 10%. The website of the Federal Reserve Bank of New York explains that as money is redeposited and relent throughout the banking system, this 10% held in “reserve” can be fanned into ten times that sum in loans; that is, $10,000 in reserves becomes $100,000 in loans. Federal Reserve Statistical Release H.8 puts the total “loans and leases in bank credit” as of September 24, 2008 at $7,049 billion. Ten percent of that is $700 billion. That means we the taxpayers will be paying interest to the banks on at least $700 billion annually – this so that the banks can retain the reserves to accumulate interest on ten times that sum in loans.

The banks earn these returns from the taxpayers for the privilege of having the banks’ interests protected by an all-powerful independent private central bank, even when those interests may be opposed to the taxpayers’ — for example, when the banks use their special status as private money creators to fund speculative derivative schemes that threaten to collapse the U.S. economy. Among other special benefits, banks and other financial institutions (but not other corporations) can borrow at the low Fed funds rate of about 2%. They can then turn around and put this money into 30-year Treasury bonds at 4.5%, earning an immediate 2.5% from the taxpayers, just by virtue of their position as favored banks. A long list of banks (but not other corporations) is also now protected from the short selling that can crash the price of other stocks.

Time to Change the Statute?

According to the Fed’s website, the control Congress has over the Federal Reserve is limited to this:

“[T]he Federal Reserve is subject to oversight by Congress, which periodically reviews its activities and can alter its responsibilities by statute.”

As we know from watching the business news, “oversight” basically means that Congress gets to see the results when it’s over. The Fed periodically reports to Congress, but the Fed doesn’t ask; it tells. The only real leverage Congress has over the Fed is that it “can alter its responsibilities by statute.” It is time for Congress to exercise that leverage and make the Federal Reserve a truly federal agency, acting by and for the people through their elected representatives. If the Fed can demand AIG’s stock in return for an $85 billion loan to the mega-insurer, we can demand the Fed’s stock in return for the trillion-or-so dollars we’ll be advancing to bail out the private banking system from its follies.

If the Fed were actually a federal agency, the government could issue U.S. legal tender directly, avoiding an unnecessary interest-bearing debt to private middlemen who create the money out of thin air themselves. Among other benefits to the taxpayers. a truly “federal” Federal Reserve could lend the full faith and credit of the United States to state and local governments interest-free, cutting the cost of infrastructure in half, restoring the thriving local economies of earlier decades.