Is The Food We Eat Killing Us? 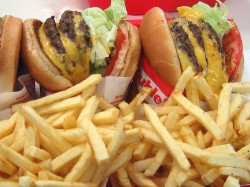 Are we digging our own graves with our teeth?  Is the food that we eat every day slowly killing us?  When I was growing up, I just assumed that everything in the grocery store was perfectly safe and perfectly healthy.  I just assumed that the government and the big corporations were watching out for us and that they would never allow something harmful to be sold in the stores.  Boy, was I wrong!  Today, the average American diet is extremely unhealthy.  Most of the foods that we all love to eat are absolutely packed with things that will damage our health.  Many of the ingredients that make our foods “taste good” such as fat, salt and sugar can be extremely damaging in large amounts.  On top of that, most processed foods are absolutely loaded with chemicals and preservatives.  The next time you go to the grocery store, just start turning over packages and read the “ingredients” that are being put into our food.  If you have never done this before, you will be absolutely amazed.  In many of our most common foods there are “ingredients” that I cannot even pronounce.  Sadly, most Americans have no idea that eating a steady diet of these processed foods will likely leave them massively overweight, very sick and much closer to death.

Unfortunately, most Americans are content to chow down on foods that are quick to make and that taste good.

In particular, Americans are absolutely addicted to foods that are loaded with sugar and high fructose corn syrup.

When you start looking at food product labels, you will find that either sugar or high fructose corn syrup is in almost everything.

For example, I was absolutely amazed when I learned that most bread sold in our grocery stores contains high fructose corn syrup.

Why in the world would they need to put that into our bread?

Today, Americans are consuming far more sugar and high fructose corn syrup than ever before, and this has many health professionals very alarmed.  The following is an excerpt from an article on the website of the Mayo Clinic….

Some research studies have linked consumption of large amounts of any type of added sugar — not just high-fructose corn syrup — to such health problems as weight gain, dental cavities, poor nutrition, and increased triglyceride levels, which can boost your heart attack risk.

But it is not just sweeteners that are a concern.

There are great concerns about much of the meat that we eat as well.

Today, we grow animals much larger than we used to, but it comes at a price.

For example, we pump our cows full of growth hormones and they stand around in piles of their own manure until it is time for them to die.

If many Americans were aware of where the “cheap beef” in their grocery stores really comes from they might just change their eating habits.

Another dramatic change that has happened to our food supply in recent decades has been the rise of genetically modified crops.

In this area, there has been nothing short of a revolution.

At this point, approximately 70% of all processed foods in our grocery stores contain at least one ingredient that has been genetically modified.

This is one reason why so many Americans have shifted to an organic diet.  Nobody really knows what the long-term health effects of eating all of this genetically-modified food will be on all of us.

But there are some things that we do know.

For example, if you drink large amounts of soda every day you are going to gain weight and you are likely to damage your health.

Sadly, even though we know this, the average American still consumes over 600 12-ounce servings of soda per year.

Is it any wonder that we have an obesity epidemic in America?

As I wrote about the other day, approximately 36 percent of all Americans are obese.

In fact, the United States has a higher percentage of obese people than any other major industrialized nation does.

All of this obesity helps to explain the dramatic rise that we have seen in diseases such as cancer, heart disease and diabetes in recent years.

It is not a mystery why this is happening.

It is because of our unhealthy diets.

The food we eat is killing us.

We are a nation that is becoming a little less healthy every single day, and this is causing healthcare costs to completely spiral out of control.

According to the Bureau of Economic Analysis, health care costs accounted for just 9.5% of all personal consumption back in 1980.  Today they account for approximately 16.3%.

That is an incredible rise.

And health care costs have been rising much faster than the overall rate of inflation.

For example, health insurance premiums have risen three times faster than wages have in the United States over the past decade.

As Americans get sicker, health care will continue to be a “growth industry”.

When we all get sick, what do the doctors do?

They put us all on prescription drugs.

According to the CDC, the percentage of Americans that report that they have taken at least one prescription drug within the last 30 days has risen to almost 50 percent.

But what happens when you take prescription drugs?

Well, most of them have nasty little side effects that cause even more health problems.

You know, there is something to be said for going back to a much more natural approach to health.  For example, a recent study found that Amish children have very low levels of asthma and allergies.  The following is from a recent Reuters article….

Amish children raised on rural farms in northern Indiana suffer from asthma and allergies less often even than Swiss farm kids, a group known to be relatively free from allergies, according to a new study.

“The rates are very, very low,” said Dr. Mark Holbreich, the study’s lead author. “So there’s something that we feel is even more protective in the Amish” than in European farming communities.

What it is about growing up on farms — and Amish farms in particular — that seems to prevent allergies remains unclear.

Could the Amish teach the rest of us a thing or two about staying healthy?

That is something to think about.

Another aspect of all this is the packaging that our food comes in.

Chemicals from the packaging our food comes in can often get into our food and have serious health effects as an article by Emily Barrett recently described….

Increasingly, evidence shows that the plastics and wrappers used for packaging can inadvertently leach unwanted chemicals into food. Several recent studies found high levels of bisphenol A – an environmental chemical that can disrupt hormonal processes – in canned foods and in packaged foods for people and pets.

Now, another study suggests that the problems go far beyond just one culprit or one health effect. Among the many toxic chemicals that can migrate from packaging into food are the endocrine disrupting phthalates and organotins and the carcinogen benzophenone. These compounds are heavily used in food packaging and have known health effects, yet are not routinely tested or regulated in food, according to the paper’s author Jane Muncke.*

Although some regulations exist to guarantee safe food packaging, the current system does not address concerns posed by endocrine disrupting chemicals, Muncke explains.* The associated health effects of exposure to hormone altering compounds are many and varied, including immune disfunction, metabolic disorders (diabetes, thyroid) and reproductive problems.

But our story is still not over.

After we are done with our food we throw the packaging in the garbage and most Americans never even think about where it eventually ends up.

Unfortunately, much of it ends up out in the ocean.

In the Pacific Ocean today, there is a toxic stew of plastic and garbage about twice the size of the continental United States that is known as the “Great Pacific Garbage Patch“.

According to a BBC report, there are now 100 times more small plastic fragments in the northeast Pacific Ocean than 40 years ago.

But most of us never even stop and think about how the food we eat is destroying our bodies and the world around us.

Most of us just go through our daily lives assuming that somehow everything is going to be okay.

But the truth is that our food is causing major problems.

Sadly, with each passing year the federal government and the big corporations get even more control over our system of food distribution.

Hopefully more Americans will wake up and will start rejecting the “food” that the system wants to cram down our throats.

We all need to start making better choices.

Growing a garden, eating organic foods and supporting local farmers are some good places to start.