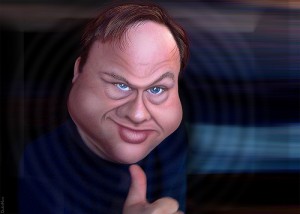 By now many people have probably heard about or have seen the on air confrontation between CNN talk show host Piers Morgan and radio host Alex Jones.  The discussion between Morgan and Jones if you even want to call it that largely consisted of Jones behaving like a loud mouthed monkey as they debated the different sides of the gun control issue.

This bizarre incident like other media spectacles that Jones has been involved in seems to be nothing more than another staged event to further the personality cult of Alex “Jim” Jones and to boost Morgan’s pitiful television ratings.  Unfortunately, there are many people who still believe that Jones is an honest man promoting freedom and fighting corruption when past history clearly shows us that this is not the case.

Simply put, Jones is a creation of the corporate controlled media.  The reach of his Austin Texas media platform has only been made possible due to the fact that over the past decade he has been promoted by the likes of big name media outlets such as Fox News, CNN, ABC and countless other radio and television platforms.  Without the support of these big media platforms, there is no way this man would be in the position that he enjoys today.

For the past few years his web sites have been regularly linked to by Matt Drudge’s web site the Drudge Report which reaches millions of people on a daily basis.  Drudge’s connections to the media establishment are well documented which is not surprising considering Drudge is Jewish just like the people who run the vast majority of these big media enterprises.  Jones has even been a regular guest on Coast to Coast AM a nightly syndicated radio broadcast for over the past decade.

With this type of support, it is obvious that Jones is just as phony as all the other dirt bag shills we see on the big television news channels.  Over the years there has been an increasing number of people getting news and information from the Internet who are no longer believing the propaganda rubbish on the big media outlets.  As a result, it became necessary to fund and support an operation that appears to be outside of the mainstream but in reality exists as a controlled opposition front.

The Jones media operation is exactly this and it is becoming increasingly obvious that this is the case based off of this latest stunt on Morgan’s show and previous stunts like the insanely ridiculous Charlie Sheen interview a short while ago.  Although many people have probably forgotten, the Sheen event literally put Jones in the center of what was at the time, the biggest tabloid news story in the United States.  It resulted in his media operation receiving promotion from all of the biggest news and entertainment shows including an invite on ABC’s talk show “The View” which is watched by millions of people.

There are countless other reasons why this man and his operation are completely untrustworthy but let’s look at one that is most applicable to what happened on the Morgan show.  In 2010 Jones completely disrupted a pro-gun rights rally in Austin Texas by using a megaphone to shout over people who were speaking to an audience of second amendment advocates.  The only reason why someone would do something like this is if they are completely insane, a paid operative, a jealous egotistical freak or all of the above.  His actions at this rally also bring into question his integrity in supporting the second amendment as he alone managed to ruin what looked to be a successful event promoting gun rights.

The bottom line though is that the whole thing just reeks of a stunt from start to finish.  Never mind the crazy nature of the interview, but even weeks ago you can see how this was being built up with Jones endorsing a petition to deport Morgan from the United States.  On top of that Jones would claim that after the interview paid goons working for New York City Mayor Michael Bloomberg were making veiled threats to him and that his life was in danger.  This is comical considering he’s previously made similar claims with supposed guys in high and tight haircuts from the U.S. Army following him around.  According to his own statements, his life has been in danger countless times yet nothing has ever happened to him so why should we believe him this time around?

His websites would even make a big deal out of his alleged encounter with the TSA during his travels to New York City for the interview.  Even more ridiculous is the fact that Jones stated that his appearance on the Morgan show made a Jewish CNN producer cry right after the interview ended.  Clearly the Jones media operation has been attempting to squeeze every last bit of attention they can get from this by promoting these absurd stories.

As much as Jones should be loathed, Morgan as a media figure should be equally as despised.  Why the hell is there some jackass Brit on a primetime CNN slot telling Americans what policies he thinks should be implemented here?   The last thing Americans want or need is another media propagandist on television, let alone a propagandist who isn’t even an American.  Morgan’s links to the much publicized British phone hacking scandal have been well documented and widely reported raising serious questions about his ethics.  In fact the ethics of both Morgan and Jones are deeply in question making it even more likely that they would collude to engage in some form of chicanery.

To reiterate, this appears to have been nothing more than a staged media stunt that benefitted the establishment in every way possible.  Jones made second amendment advocates look insane, it drew massive social media attention to Morgan’s horrific news show and now more people know who Jones is with his website being plastered all over the media.   In fact the stunt was so successful that Alex Jones became the number one trending topic worldwide on Twitter for over a day.  If Jones was really against the establishment do you really believe they would be giving him this much free press coverage, let alone allow him to spend several minutes ranting about the second amendment on a prime time cable news broadcast?

Please do not support Alex Jones or anything related to his operation in any way.  He is a creation of the corporate controlled media and is only pretending that he has no associations with them.  He is nothing more than an actor just like Bill O’Reilly, Sean Hannity and other stooges who wear fancy suits that talk in front of a camera.
This is a man who once claimed that the Arabs run Hollywood despite the fact that Jewish interests dating back to the early part of the 20th century have always run Hollywood. This man is nothing more than a Judas goat leading everyone to slaughter. It is truly unfortunate that we will likely see many more of these media spectacles involving the likes of Mr. Jones as he takes his place as the new Rush Limbaugh.