Automated Insights: Computers May Not Replace Human Writers, but Is this what the future of content looks like? 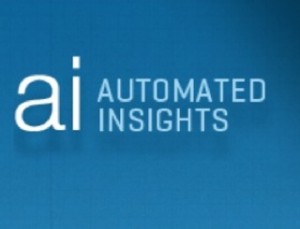 There are companies currently providing machine-generated content to various sites and businesses – articles created by machines rather than humans. Some wonder if the future of journalism is auto-generated content, and if journalists will be out of jobs because of it.

We’ve written about Narrative Science, one such company, several times. This week, we spoke with Robbie Allen, CEO of Automated Insights, another such company. Based on our conversation, it seems like humans will still have plenty of writing jobs for the foreseeable future.

One great point Allen made is that people will always have different perspectives on stories. It’s easy to say, “Uh oh, the robots are going to take our jobs,” but really, why should it be any different than if the AP or the New York Times or the Wall Street Journal puts out an article? You’re still going to get numerous other sites, blogs and social outlets with other people sharing their own thoughts and crafting their own stories. In fact, that’s what has made the Blogosphere such an interesting evolution of news.

Allen shared some similar thoughts in a conversation at a recent O’Reilly conference:

At this stage, there is clearly still a long way to go as far as auto-generated content being able to deliver on certain types of analysis and opinions. That’s why it tends to do better with data-driven topics, like sports and finance (though, from the sound of it, the technology is getting better).

Allen thinks in 50 years, we’ll look back and think it was funny that we ever had humans doing quantitative analysis. Computers are just better at number crunching, he says, but humans are better at qualitative analysis – another reason why human writers shouldn’t fear for their jobs too much just yet.