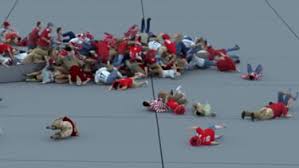 An odd but impressive video popped up on Vimeo recently, and we can’t stop watching it. It’s a CGI (computer-generated imagery) rendering of a horizontally rotating column knocking over and pushing around what looks like humans. The video is titled “I’ve fallen, and I can’t get up!” It was uploaded by Dave Fothergill, a visual-effects artist from the U.K. Why can’t we take our eyes off this? Because it’s almost hypnotic!

Fothergill says he used a special-effects plug-in called Miarmy, which was designed to create crowd simulations. If you need me, I’ll be staring at this for the rest of the day — it gets better every time I watch it!