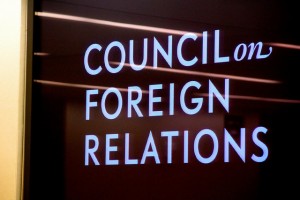 The CFR (The Council on Foreign Relations) openly tell you what they are attempting to do. Now and in the future… The CFR has largely controlled foreign and domestic policy for decades. Members include Government, Media, Corporations, Religious leaders, etc…. It is the legacy of World Government sponsor Cecil Rhodes, JP Morgan, and the Black Nobility of Europe.

WHAT IS THE CFR?