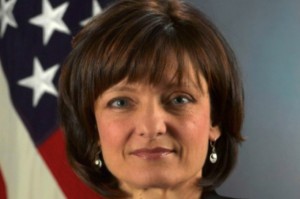 Regina Dugan, the director of the Defense Advanced Research Projects Agency (DARPA), will be leaving the Pentagon’s mad scientist research agency for the corporate Big Brother known as Google.

Dugan has only been at DARPA for less than three years and was “offered and accepted [a] senior executive position” with Google, according to Eric Mazzacone, a spokesperson with DARPA.

Mazzacone added that Dugan felt she could not refuse such an offer with an “innovative company” like Google, which also has a close relationship with the American intelligence community.

Dugan has been a relatively popular director because of her emphasis on cybersecurity matters and next-generation manufacturing, which has garnered significant support from the Obama administration, which allowed DARPA to dodge the bullet of budget cuts that have hit the Pentagon as of late, according to Danger Room.

Dugan also is lauded by Danger Room for her push into “crowdsourcing” and her increasing outreach to the hacker community, which has resulted in some quite astounding technology like the miniature, inexpensive, and easily concealed spy computer known as the F-BOMB.

During Dugan’s tenure she also has diverted some of the quite substantial research funds devoted to long-term projects (some of which are a long way off from being used in the field) to more short-term operational projects.

“There is a time and a place for daydreaming. But it is not at Darpa,” she told a congressional panel in March of 2011. “Darpa is not the place of dreamlike musings or fantasies, not a place for self-indulging in wishes and hopes. Darpa is a place of doing.”

While this might seem like a common sense statement coming from any other agency, when it is coming out of the mouth of the director of DARPA, which is behind such technologies as the militarized hallucination technology known as “battlefield illusions” (among many other strange and unbelievable technologies) it is remarkable indeed.

Dugan’s history at DARPA is not all quite as glowing as it may seem, especially given her history with RedXDefense, a bomb detection company which she co-founded and still holds partially owns.

Currently, the Pentagon’s Office of Inspector General (OIG) is investigating contracts worth hundreds of thousands of taxpayer dollars that were awarded to RedXDefense by DARPA under Dugan’s leadership.

This shouldn’t be all that surprising to my readers, given that this is standard operating procedure for the war profiteers with blatant conflicts of interest like Dugan and Michael Chertoff.

A military memorandum revealed that a separate audit is looking into some of the 2,000 other contracts DARPA signed under Dugan in an attempt to “determine the adequacy of Darpa’s selection, award, and administration of contracts and grants.”

No results of the investigations have been released to the public as of yet and according to Mazzacone, the inquiries had “no impact” on Dugan’s decision to leave DARPA.

According to Mazzacone, “the only reason” that she decided to depart the Pentagon was the attractive prospect of working at Google.

“Dr. Dugan’s departure is not related to an OIG investigation,” Lt. Col. Melinda Morgan, a spokesperson for the Office of the Secretary of Defense, claimed in a statement. “The OIG conducts regular audits of Defense agency contracts and ethics programs; as a Defense agency, this includes Darpa.”

“In the spring, questions were raised over whether it was appropriate for Darpa to have funded a proposal submitted by RedXDefense, particularly in light of the Director’s continuing interest in this closely held small business,” Morgan added. “In response, the Department reviewed the processes in place at Darpa to ensure that those processes would ensure integrity and public confidence.”

Mazzacone said that Dugan is expected to leave DARPA for the internet behemoth “sometime in the next few weeks” at which time deputy director Kaigham Gabriel will take over as acting chief.

“Regina Dugan’s leadership at Darpa has been extraordinary and she will be missed throughout the Department,” Frank Kendall, Acting Under Secretary of Defense for Acquisition, Technology and Logistics, says in a statement.

“We are all very grateful for the many contributions she has made in advancing the technologies that our war fighters depend on. She leaves for an exciting new opportunity and we wish her every success,” Kendall added.

The biggest question is: what will Dugan be bringing to the table at Google? It is certain that she will bring her experience at the highly secretive research agency to Google, but the major unknown is how exactly his will take shape.

While Google already has established connections with the Central Intelligence Agency (CIA), National Security Agency (NSA) (which refuses to disclose the true nature of their relationship with Google) and other government agencies, Dugan’s move will just serve to reinforce these links.

Posted in Darpa | Leave a response