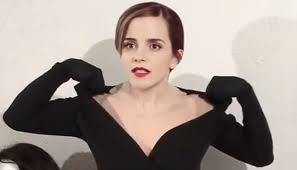 The source of this is actually a fan made video that first surfaced on YouTube in early March. Posted by user curveballbe, the footage featured the ‘Harry Potter’ actress removing a rubber mask and chest to become the Colombian model and actress Sofia Vergara.

The CGI rework of a short video originally posted by YouTube user Kerry Johnson to an account associated with Maskon.com – a website focusing on “female masking”. You can watch the original, here.