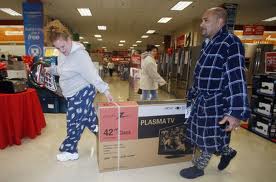 Forget the door-busters, coupons, and “friends and family” deals. U.S. shoppers on the whole will be paying more over the next few weeks than they do the rest of the year. Turns out, retail profit margins tend to be higher during the holiday period, despite all the promotions.

Among the 15 largest U.S. retailers, operating margins in the holiday quarter last year were 11 percent, compared with 9 percent in the preceding nine months. Amid the year-end shopping frenzy, these companies padded their bottom lines, on average, by roughly one-quarter.

Home Depot (HD) and Lowe’s (LOW) may be the only places where a shopper can expect to catch an honest break at the end of the year. Macy’s (M), Bed Bath & Beyond (BBBY), and L Brands (LTD), the company behind Victoria’s Secret, are particularly adept at producing opulent holiday returns.

How can this be, a dewy eyed mall rat may wonder? For one, in the time-honored loss-leader tradition, most shoppers don’t stick to the killer deals. For every $98 flat-screen TV, there’s plenty more to buy at a 98 percent markup.